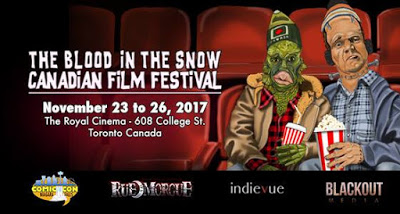 The sixth edition of The Blood in the Snow Canadian Film Festival is going to be a very interesting experience for me. This is mainly because that instead of attending purely as media, I am actually one of the filmmakers at this year’s festival, with my short film Itch playing as part of the Short Film Showcase on November 25. I still plan on covering the festival as usual, though I will also participate in the industry-only events for the first time. To prevent any possible conflict of interest, this will be the only post that mentions my status as a filmmaker in the festival, including omitting Itch from my review for the Short Film Showcase. Any future posts related to the screening of Itch can be found on the film’s Facebook page, as well as the Instagram and Twitter for my production company Sean Kelly Productions.

Anyways, here is the full line-up of this year’s Blood in the Snow Film Festival: