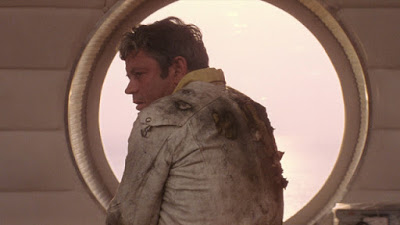 As part of TIFF’s ongoing retrospective The Poetry of Apocalypse: The Films of Andrei Tarkovsky, the TIFF Bell Lightbox will be re-releasing a new digital restoration of Tarkovsky’s 1972 science fiction romance Solaris. The release will kick-off with a screening of the film on Nov 24 at 6:30 PM, introduced by Morgan Hoffman of Space TV’s Innerspace.

Solaris focuses on a psychologist named Kris Kelvin (Donatas Banionis), who travels to a space station orbiting a mysterious planet named Solaris. Only a skeleton crew remains on the space station, consisting of Dr Snaut (Jüri Järvet) and Dr Sartorius (Anatoliy Solonitsyn). Soon after arriving on the space station, Kris finds out that Solaris causes thoughts and memories to manifest in physical form. Indeed, Kris is shocked to find his long dead wife Hari (Natalya Bondarchuk) alive and well. As Kris begins to fall in love with Hari all over again, he has to make decisions about these “visitors” that can have huge moral implications.

With a running time close to three hours, Solaris takes its time letting its story unfold. In fact, the entire first act of the film takes place entirely on Earth, focusing primarily on the testimony by former Solaris crew member Berton (Vladislav Dvorzhetsky), who reports seeing a four meter tall child. Nearly an hour has passed before Kris Kelvin finds himself on the space station, as which point the pacing of the film becomes somewhat less slow paced.

In many ways, Solaris can be seen as the Soviet answer to 1968’s 2001: A Space Odyssey, with both films having some similarities in the plot. However, at its core, Solaris is much more of a romance than a science fiction film, as Kris’ relationship with Hari becomes a focal point of the story. Solaris was remade in 2002 by Steven Soderbergh, which received a mixed response, despite having its fair share of followers.

Overall, you shouldn’t miss your chance to see this Soviet science fiction classic on the big screen!