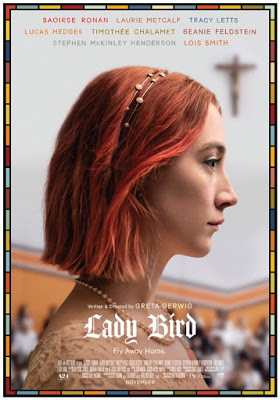 A teenage girl comes of age during her final year of high school in Lady Bird. Christine McPherson (Saoirse Ronan), who prefers to be addressed as “Lady Bird,” is a seventeen year old girl living in Sacramento, California. Lady Bird is currently in her final year at a Catholic high school and she desperately wants to go to college in the east coast to get away from Sacramento and her overbearing mother Marion (Laurie Metcalf). Throughout her final year, Lady Bird grows as a person through her friendships and relationships.

Actress Greta Gerwig (Frances Ha) makes her directorial debut with Lady Bird. The film focuses on the titular character, who is unsatisfied with her life in Sacramento, particularly when it comes to the overbearing relationship she has with her mother. Lady Bird secretly asks her father Larry (Tracy Letts) for help applying to out of state colleges and she joins a school musical with her friend Julie (Beanie Feldstein), so she can get close to a boy named Danny (Lucas Hedges). Lady Bird soon finds that love and friendship can be quite complicated in Sacramento.

While it would be a bit too presumptive to say that Lady Bird is an autobiographical film for Greta Gerwig, it is quite obvious that Saoirse Ronan’s titular character is an avatar for the types of people Gerwig played in her roles. While it is a bit odd seeing 23 year old Ronan go back to playing a teenager after breaking through with her first major adult role in 2015’s Brooklyn, her performance in Lady Bird does continue the more mature trajectory that her career has been taking. Lady Bird is a highly independent young woman, who tries not to let her family’s slightly impoverished status bring her down. However, Lady Bird is still a teenager and she soon finds that she has many life lessons still to learn.

At the core of Lady Bird is the interactions between Saoirse Ronan and Laurie Metcalf. On the surface, Metcalf’s Marion is quite overbearing mother, who won’t let Lady Bird live an independent life. However, as the film progresses, it soon becomes apparent that Marion’s behaviour towards Lady Bird is merely tough love and that she truly cares about her daughter’s well being. On the flip side is Tracy Letts as Lady Bird’s father Larry, who has the appearance of being the easier to get along with parent, but who turns out to be having some serious problems of his own.

Another theme that is present throughout Lady Bird is that of religion. I should note that as an alumni of a Catholic high school, I am humoured at how much Catholic schools in Toronto, which are like public schools except with uniforms and religious education, are apparently different than US Catholic schools, which seem to be entirely run by priests and nuns. There are signs throughout the film that Lady Bird isn’t the most devout of Catholics, as seen from an early scene of her and Julie snacking on communion wafers and a later scene that has her criticizing an anti-abortion assembly. However, she also criticizes an atheist for “allowing people to call him by a name his parents made up, but not believing in God.” While religion isn’t a central theme of Lady Bird, its aura is still present throughout the film.

Going into Lady Bird, I was already a big fan of Greta Gerwig’s acting work, dating all the way back to her early roles as part of the mumblecore movement. With Lady Bird, Gerwig seamlessly graduates behind the camera, while Saoirse Ronan successfully steps into the role of Gerwig’s on-screen avatar. Altogether, Lady Bird is quite charming and heartwarming coming of age story.