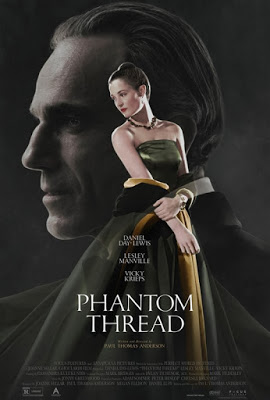 A famous tailor finds his world thrown out of order when he falls a young woman in Phantom Thread. Reynolds Woodcock (Daniel Day-Lewis) is a famous dressmaker in 1950s London, who lives his life to a strict routine, with the help of his sister Cyril (Lesley Manville). On day, Reynolds meets a young waitress named Alma (Vicky Krieps) and the two quickly find a connection between each other. Alma comes to live with Reynolds and soon begin to love each other deeply, though Alma’s presence ultimately begins to disrupt Reynolds’ carefully planned routine.

A decade after their Oscar-winning collaboration in There Will Be Blood, Daniel Day-Lewis reunites with writer/director Paul Thomas Anderson for the romantic drama Phantom Thread. Day-Lewis plays Reynolds Woodcock, a charming and seductive tailor, who tends to suffer from obsessive compulsive tendencies and a dependency on his sister Cyril, who is “always right.” Reynolds creates beautiful dresses with an extreme attention to detail, with him also having the habit of hiding messages or mementos with the seams of his garments.

While the character of Reynolds Woodcock is a less showy performance for Daniel Day-Lewis than that of Daniel Plainview, the character ends up still being quite a complex one. While Reynolds puts great care and control into the dresses he creates, his routines begin to unravel as he begins to fall in love with Alma. This results in the two having a love-hate relationship, where they are completely committed to each other one minute, while practically wanting to kill each other the next.

Probably the closest film in Paul Thomas Anderson’s filmography Phantom Thread compares to is 2002’s Punch Drunk-Love, since like that film, Phantom Thread is ultimately a romance, albeit a very unconventional one. In fact, this film features one of the most twisted examples of a romantic gesture in a film that I have ever seen, especially since you don’t realize it is one until the very last minute.

After the mixed response I had to 2014’s Inherent Vice, I am happy that Paul Thomas Anderson and pulled things back with a romantic drama that only he can make.