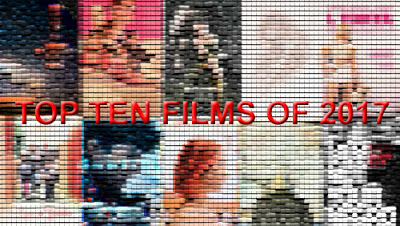 I apologize with how late I am with writing about my Top Ten Films of last year. However, at this point, this is merely a formality, since my list would have gone up on Letterboxd right at the start of the year. However, I never missed writing this post in the years I have been writing about film and I am not about to start now.

10. Baby Driver (review)
I have been a fan of Edgar Wright since Shaun of the Dead and I can say without a doubt that his latest film Baby Driver was one of the most fun times I had in the cinema in 2017!

9. Phantom Thread (review)
This is a film that really came under the wire to be included on my list, since technically the film only opened in Toronto last week. However, since I did end up screening the film in December, I will happily give Paul Thomas Anderson’s unconventional love story at place on this list.

8. Lady Bird (review)
While rather low on my list for a film that just won the Golden Globe for Best Picture Comedy/Musical, Lady Bird is still a very charming and heartwarming story and well worth being called one of my favourite films of the year.

7. Three Billboards Outside Ebbing Missouri (review)
Here is another film that would have probably ranked higher if it was a different year. However, it still has one of Frances McDormand’s best performances in years and I look forward to the film continuing to rule the awards circuit after its big wins at the Golden Globes.

6. The Shape of Water (review)
This can now be known as the film that one Guillermo del Toro a Golden Globe Award for Best Director. This film is del Toro’s best since Pan’s Labyrinth and I really look forward to revisiting this fantastical world.

5. City of Ghosts (review)
While it seems like City of Ghosts just came and went earlier this year, it is probably one of the most important documentaries to come out. Showing the truth about what is going on in Syria, this is a film that you should definitely seek out.

4. I, Tonya (review)
With Tonya Harding long having been portrayed as the villain by the media, I, Tonya tells her side of the story and really makes you feel for the character. This is an excellent biopic with equal parts comedy and drama and it is a film that is well worth checking out.

3. I, Daniel Blake (review)
I, Daniel Blake was a quite devastating film to watch that I was personally able to relate with. This is must watch for anyone who relies on government supports.

1. Dunkirk (review)
Whether or not you like Christopher Nolan as a filmmaker, it cannot be denied that Dunkirk is probably Nolan’s greatest technical achievement. This is a film that is designed to be seen on the biggest screen possible and I am actually afraid how my viewing experience of the film will be when I re-watch it on blu-ray. However, I have no regrets whatsoever in calling Dunkirk my favourite film of 2017.