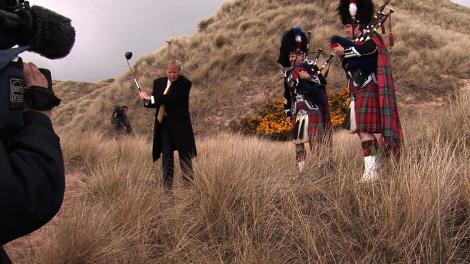 With it being the festival’s 25th anniversary, I thought that I would start my coverage this year by going back and reminiscing about the first screening I attended at the Hot Docs Canadian International Documentary festival. I’m a bit of a late bloomer attending the festival, with me not deciding to attend a Hot Docs screening until 2011. The one film I choose to see that year was Anthony Baxter’s You’ve Been Trumped, which turns out to be a documentary that is still quite timely seven years later.

For those who have no seen the documentary, You’ve Been Trumped brings Anthony Baxter to a small Scottish community, which is being threatened by Trump’s decision to build a golf course in the area. Trump wants the locals evicted from their homes and the community fights to maintain their way of life.
It can be argued that premiering at Hot Docs was a blessing to You’ve Been Trumped, which at the time was having a hard time finding distribution. Anthony Baxter would continue following the situation at this Scottish community and he would later release the follow-up films A Dangerous Game, which premiered at Hot Docs in 2014, and You’ve Been Trumped Too, which was released online on the eve of the 2016 election.
Donald Trump never ended up going through with his initial presidential campaign and I would like to thing that the less-than-positive depiction of him in You’ve Been Trumped had something to do with that. However, it is scary to think that the very first film I saw at Hot Docs was about a man who is now the President of the United States. I highly recommend seeking out You’ve Been Trumped and seeing that the warning signs were there all those years ago.