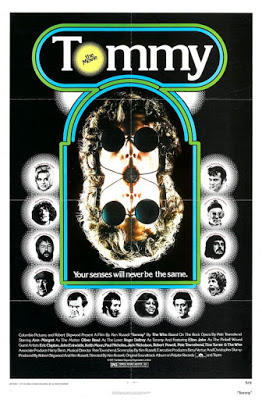 This month I watched Ken Russell’s 1975 film based on the rock opera by The Who. Tommy (Roger Daltrey) has been supposedly death, dumb, and blind since witnessing as a kid his stepfather Frank (Oliver Reed) kill Tommy’s father, who was thought to have been killed in war. Frank and Tommy’s mother Nora (Ann-Margret) try in vein to cure Tommy of affliction, however it is then found that he is a master pinball player, which quickly turns Tommy into a cult sensation.

The Who’s 1969 album “Tommy” is one of their better known efforts, featuring hit songs such as “Pinball Wizard,” “I’m Free,” and “See Me, Feel Me/Listening to You,” the latter of which is part of the rock opera’s climatic melody. In 1975, The Who teamed up with director Ken Russell (The Devils) to bring the story of the album to the big screen. Tommy is for lack of a better description a feature length music video, with the lyrics of the songs being used in place of dialogue. The film adaptation of Tommy actually differs slightly from the original, with some of the songs placed in a different order, as well as Pete Townshend writing a handful of new songs for the film.

The core cast of Tommy includes The Who’s frontman Roger Daltrey as the titular star, as well as Ann-Margret and Oliver Reed as his parents. While Ann-Margret handles the singing of her lines quite well, Oliver Reed does leave something to be desired, which probably makes it a good thing that his character goes more into the background in the second half of the film, when Tommy’s cult stardom becomes the focus. The film also features a number of guest appearances, who appear for a single song, such as Eric Clapton, Tina Turner, and Elton John, the latter of whom appears as the Pinball Wizard, wearing one of the largest pairs of boots you will ever see. The film also features a notable cameo by Jack Nicholson, who actually turns out to be a pretty good singer, at least better than Oliver Reed.

Tommy came out at a time when cinematic rock operas were quite a common occurrence, with the film coming around the same time as 1974’s Phantom of the Paradise, as well as The Rocky Horror Picture Show. However, I believe that Tommy is the first film that I can think of to be adapted from an album. A few years later, another of The Who’s rock operas would hit the big screen with 1979’s Quadrophenia and there would also later be films based on Sgt Pepper’s Lonely Hearts Club Band (1978) and Pink Floyd’s The Wall (1982). Tommy would even go on to be a successful Broadway musical in the mid-1990s.

While I do admit that Tommy is probably more enjoyable a film if you are a fan of The Who’s music ahead of time, it is probably one of the more successful “films based on rock albums” out there.