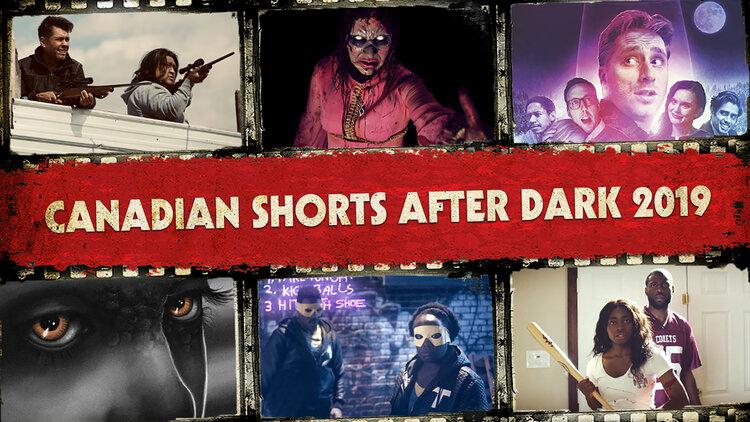 Here are my thoughts on the films that played as part of the Canadian Shorts After Dark showcase.

Tom (Chris Wilson) and Paige (Gwynne Phillips) attend a party hosted by their friends Brad (Paul Beer) and Claire (Briana Templeton), which very quickly goes off the rails. Alaska is a dark comedy short directed by comedians Chris Wilson, Gwynne Phillips, and Briana Templeton, the latter two being best known as the Toronto-based sketch comedy duo The Templeton Philharmonic. In fact, Alaska has a very sketch comedy feel to it, as Tom’s efforts to impress the guests at this party leads to disastrous and deadly results. Overall, this was a quite enjoyable short.

Two men protect a safe haven during a zombie apocalypse. The title of Zombies and Indians says all you need to know, as shows a zombie apocalypse from an indigenous perspective. It is kind of ironic that this short and the feature Blood Quantum came out the same year and like Jeff Barnaby’s film, Keith Lawrence uses the zombie apocalypse as a jumping-off point for a short that it ultimately about upholding traditions for the First Nations.

No One Will Ever Believe You (Frederic Chalte, 6m)

A girl is beaten to the punch when it comes to scaring her sister. No One Will Ever Believe You is a relatively simple horror-comedy short that is really all about the titular punchline.

A trip to the cabin for free friends is disrupted by a siren’s call. Probably one of the most interesting elements of Plainsong is the decision to make one of the three protagonists deaf, which makes her immune to the haunting music that is coming from the water. This comes to play big time in the latter moments of the film, which is ultimately a well-done creature tale.

A brutal mugging of a street musician is intervened by two teenage superheroes, who have the power to astro-project and stop time. Moment is a surprisingly touching short film that uses its superhero premise to tell a story about learning to stand up for yourself.

A group of teenage girls uses an urban legend as the basis for a prank, though the story quickly turns out to be horrifyingly real. Best Friends Forever is quite well made and darkly humorous supernatural horror short that’s all about a vengeful spirit just in search of a friend.

A brother and sister are visited by a door-to-door salesman who won’t take no for an answer. Imagine a World is a clever little horror short that really into our fears about being forced to buy products and services that we don’t need.

Here are my thoughts on the Canadian short films that preceded the features during Toronto After Dark.

Screened in front of Extra Ordinary

A trio of Christmas carolers are kidnapped by someone who wants to join the group. We Three Queens is a holiday-themed dark comedy, which sports solid performances from its all-female cast, with particular note going to the lead performances by Erin Margurite Carter and Rachel Wilson.

Screened in front of Witches in the Woods

A woman is terrorized by an unseen force in the woods. Eyes Open is a vaguely supernatural thriller with the title being a major pun for how it all turns out.

Screened in front of Blood Machines

A group living in a military bunker finds a survivor in the snowbound wasteland. It’s hard to view this post-apocalyptic science fiction short on its own since Far Horizon is obviously part of a larger series. However, it’s still quite well made.

Screened in front of James vs His Future Self

A woman passive-aggressively responds to her husband’s constant calls for a sandwich. Make Me a Sandwich is a very darkly humorous short that goes in increased extremes, before building to its macabre punchline.

Screened in front of The Odd Family: Zombie on Sale

The arrival of zombies causes a family to flee. That’s really all there is to this short.

Screened in front of Mutant Blast

A husband and wife’s grave robbing caper is disrupted when one of them loses an eye. Grave Sight is a quite humorous short involving dangling eyeballs and accidentally summoned demons.

Screened in front of The Furies

A woman has perfected the cure for heartache. Down the Rabbit Hole is really a one gag film, though it is somewhat well executed.

A woman reads the feedback from the couple renting her apartment, who might not have been entirely honest. Hearth turns out to be quite well done cautionary tale for anyone planning to use Airbnb to rent out their home.

Screened in front of Paradise Hills

A scheming housewife comes up with a way to dispatch of her unappreciative husband. Barbara-Anne is a dark comedy with a protagonist that can best be described as the stereotypical “Southern Belle” character. Overall, this was decent short.

This Star Wars fan film profiles a man who makes custom lightsabres for clients. The Lightsabre Maker is an incredibly well-produced Star Wars mockumentary with some very impressive special effects and a very tongue-in-cheek plot.

Screened in front of 8

A mother’s curse is finally fulfilled multiple generations later. Kakatshat is a relatively simple short about a father/son camping trip disrupted by a vengeful spirit, though it does feature one major jump scare.

Screened in front of Homewrecker

A man fearful of a home invader is assisted by a helpful neighbour. As you would expect from the title, A Noise That Carries is a horror short that featured some exceptionally well-done sound design. That said, I didn’t fully understand the big reveal in the short, which in some ways was a bit more goofy than scary.

Screened in front of The Assent

When a man is torn in two, he must negotiate with himself to become whole again. Schism is a very experimental short that is a masterclass in editing with split screens. As an editor myself, I can only imagine how difficult it was to piece this film together.

Screened in front of The Mortuary Collection

There is something off about the bunch of bananas a man has just bought. There isn’t all that much to the plot of Peel, which keeps its big reveal a secret until the very last shot.

Two sisters reconcile their past at a snowy cabin. It remains quite vague what Eilid and Damh is truly about, as it features flashbacks to the two protagonists playing as fairies as kids, while they seemingly have pagan rituals in the present. I don’t fully get it.

A group of men attack a convey, in order to secure its precious cargo. Dark Before Dawn: Convey is obviously part of a larger series, though this small sample still features its fair share of bloody action.

Screened in front of Come to Daddy

On his birthday, an elderly man receives a call with a strange number pattern, which kicks his hidden conditioning into action. Patterns is pretty well-done short that shows that brain-washing can have unintended side effects.

Screened in front of The Wretched

A mother rushes home to rescue her baby daughter from a demonic visitor. While I don’t fully understand while The Changeling is titled such, it is still a well-shot horror short with quite well-done creature effects.