“Canada’s First Terrorist” tells his side of the story in Eddy’s Kingdom. Eddy Haymour immigrated to Canada from Lebanon in the 1950s and found success as an entrepreneur. Acquiring Rattlesnake Island in the Okanagan Valley of British Columbia, Eddy’s ultimate dream was to open a theme park called Moroccan Shadou. However, Eddy was accused of being mentally ill and forced to sell the island to the BC government. In a desperate attempt to get the island back, Eddy orchestrated a 1975 hostage situation at the Canadian embassy in Lebanon.

Eddy’s Kingdom is a documentary by Greg Crompton (Guns to Mics) about a man considered to be Canada’s first terrorist. The film is structured around an interview with the now-elderly Eddy Haymour, who is primarily cared for by his youngest daughter Fadwa and still hopes to one day get his island back. Eddy’s side of the story is frequently contrasted with that of others, as we try to piece together who the real Eddy Haymour is.

While watching Eddy’s Kingdom, you can’t help but feel some sort of sympathy for Eddy Haymour, even if he comes across as a somewhat delusional individual, who is estranged from most of his family and even his ex-wife wrote a book entitled “Married to a Terrorist.” As we hear both sides of Eddy’s story, the truth is ultimately somewhere in between him being a mentally ill terrorist and him being a victim of a government conspiracy to take his island. 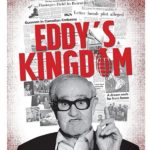