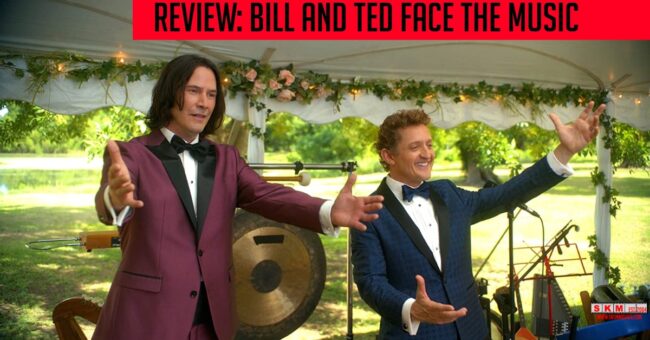 The Wyld Stallyns go on one final time-traveling adventure in Bill & Ted Face the Music. It has been more than three decades since Bill S. Preston, Esq (Alex Winter) and Ted “Theodore” Logan (Keanu Reeves) were prophecized to write a song that unites the world, however their band Wyle Stallyns has been on a downward spiral for the past 25 years. To make matters worse, they are visited by Kelly (Kristen Schaal), the daughter of their old time-traveling mentor Rufus, who bring them to her mother The Great Leader (Holland Taylor), who warns Bill and Ted that they have 72 minutes to write and perform the song that unites the world before time folds in on itself, ending all reality as they know it. Bill and Ted come up with a plan to travel to the future to steal the song from their future selves, while their 24-year-old daughters Theadora “Thea” Preston (Samara Weaving) and Wilhelmina “Billie” Logan (Brigette Lundy-Paine) go on their own time-traveling adventure to round-up historical musicians to join the Wyld Stallyns in the performance of the song.

Bill & Ted Face the Music is the long-delayed third and final chapter of this time-traveling trilogy, arrive 29 years after 1991’s Bill & Ted’s Bogus Journey. The film introduces us to the titular characters as middle-aged wash-ups, who have almost stopped believing in the prophecy that their music unites the world and have started attending couples therapy with their former-princess wives Elizabeth (Erinn Hayes) and Joanna (Jayma Mays). However, it turns out that not writing the song will have dire consequences for all time and reality. While Kelly is confident in the Wyld Stallyns’ ability to write the song, her mother The Great Leader is not so certain and sends a killer robot named Dennis Caleb McCoy (Anthony Carrigan) to just kill them instead. This new adventure sents both Bill and Ted and their daughters Thea and Billie all across time and even back to Hell, where they are reunited with disgruntled former Wyld Stallyns bassist Death (William Sadler).

There are likely a number of factors that lead to the 29 year old wait for a third Bill & Ted movie, whether it be a lack of a good script or co-star Alex Winter retiring from acting to become a documentary filmmaker. However, the stars finally aligned and we finally have Bill & Ted Face the Music written by franchise creators Chris Matheson and Ed Solomon and directed by Dean Parisot (Galaxy Quest). This back brings back some of familiar elements from the previous films, such Ted’s disapproving father Chief Logan (Hal Landon Jr.) and the recurring marriage gag involving Bill & Ted’s former crush/stepmom Missy (Amy Stoch).

While there have been an increasing number of “legacy sequels” in recent years, I do have to contend that Bill & Ted Face the Music is one of the few decades-later sequels to end up being a fitting conclusion to the franchise. 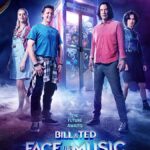