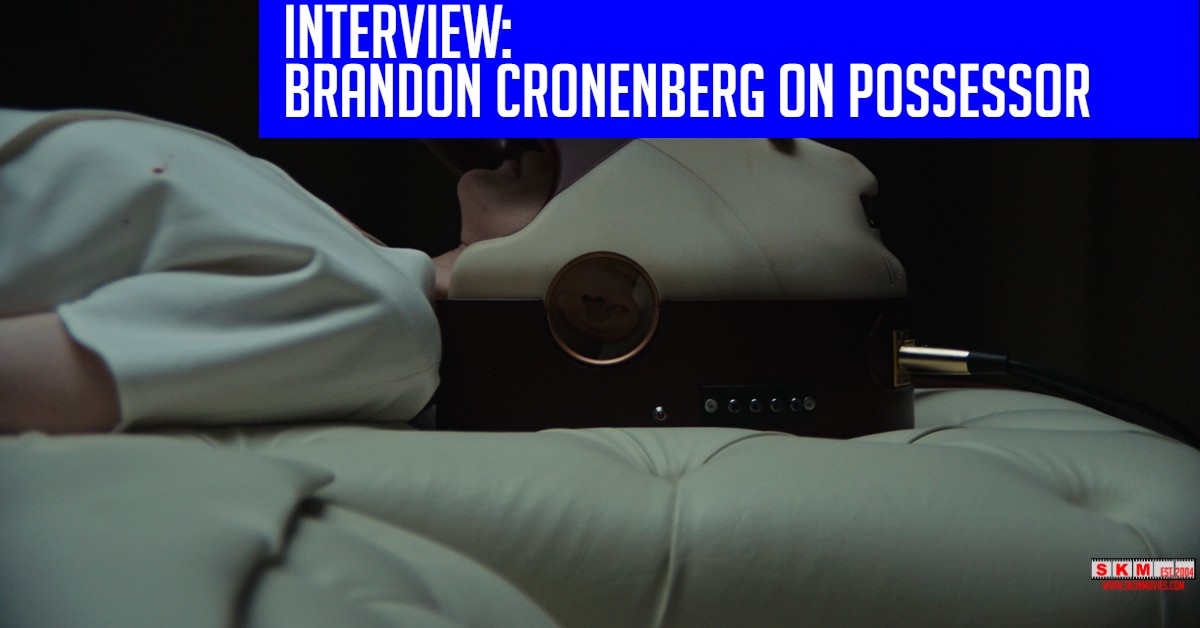 Possessor is the sophomore feature film from writer/director Brandon Cronenberg, who is of course the son of legendary Canadian filmmaker David Cronenberg. With both Possessor and its predecessor 2012’s Antiviral, Brandon Cronenberg is both following in his father’s body horror footsteps, while also trying to eke out his own voice as a filmmaker.

During a conference call to promote Possessor, Brandon Cronenberg denied that there was any thematic connection between the film and Antiviral. “I’ve had some people suggest that there are some preoccupations across the two of them, construction of identity or injecting identity in a sense into someone else’s body,” say Cronenberg. “But I honestly, wasn’t thinking of Antiviral when I was writing Possessor because they are separate process.”

However, Cronenberg did admit that there was a connection between the film’s brutal violence and the psychological journey of Possessor‘s protagonist Tasya Vos, played by Andrea Riseborough. “Relationship with violence is very much at the heart of her character. And so the violence in the film is really very much narrative,” says Cronenberg. “I felt it had to be natural, people had to feel on a sort of almost bodily level, what she was experiencing emotionally. And it also tracks with her psychology. So sometimes you’re seeing it from a more observational perspective, and then looking back on it, it’s just more sort of stylized, almost fetishistic thing for her.” Cronenberg even goes as far to compare the ordeal of Vos in the film to the PTSD suffered by drone pilots, because both are engaged in violence remotely.

The other main protagonist in Possessor is Colin Tate, played by Christopher Abbott, who is taken over by Vos’ consciousness to perform an assassination of Tate’s soon-to-be father-in-law John Parse, played by Sean Bean. The inner-conflict between Vos and Colin becomes one of the plot elements of the film, with Brandon Cronenberg discovered a lot of interesting things when researching for the film. “I did some research into the NeuroScience behind brain control essentially, and one of the things that I found was a doctor or Spanish doctor named Jose Delgado had done some experiments in the United States involving bringing in plants in animals, and also in human beings,” say Cronenberg. “And a particularly interesting one, he described in a book that he wrote an experiment where the spot in the brain that he put this wire where stimulating different areas of the brain electrically. Because where that wire was the subject was acting in response to stimulation, but then claiming those actions for themselves.”

When asked whether Brandon Cronenberg evolved as a filmmaker in the eight years since Antiviral, he found it a difficult question to answer, since he believes it to be one levied towards those looking at his work. However, Cronenberg has a number of upcoming projects in development, including one that was split off from the initial script for Possessor. “The other screenplay is still in a quiet of early “now-formed” stage of writing. It’s not really shootable in its current form, but it has some stuff in it that I am very interested in,” says Cronenberg, who goes on two describe two other projects he has in development. “One is called Infinity pool, which is in kind of tourist resort satire with Sci-fi and all elements; and then the hallucinatory space horror film called Dragon. I’ll look at those back to back as soon as I’m allowed to, but definitely the other script is something I’ll probably return to when I have some time.”