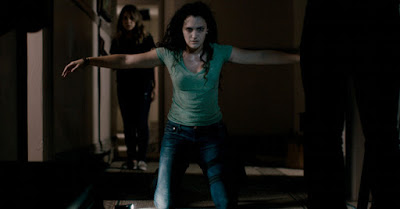 A team of ghost hunters investigate an abandoned skyscraper in Farhope Tower. The Unspecters are a group of paranormal investigators hoping to get their reality show picked up by a network. Desperate for a next level experience, team leader Jake (John White) suggests that the Unspectors head to Farhope Tower, a long-abandoned skyscraper notorious for the amount of suicides committed on the premises. Despite warnings from Jake’s best friend Andre (Evan Williams) that the tower would not be safe, the team of camera operator Judy (Lauren Collins), tech guy Simon (Tim Doiron), and rookie Zoe (April Mullen) venture into the halls of Farhope Tower.

Farhope Tower is the latest film release from Wango Films and director April Mullen, who has previously been responsible for the films Dead Before Dawn 3D and 88. The film involves this desperate paranormal investigation team entering into this skyscraper that has been abandoned for over thirty years and has been nicknamed “Suicide Tower,” due to the fact that there were suicides in the tower every other day. Of course, the team quickly finds themselves in for more than they bargained for, as all stairs in the tower only lead up and the team begin to hear threatening voices.

While there are some decent individual moments in Farhope Tower, the film as a whole is a somewhat underwhelming experience. A horror film built around a reality show was already done to slightly better effect in 2011’s Grave Encounters and Farhope Tower is quite lacking in any real scares until the final act. In fact, the film is more horrific for some hard to watch violence that comes towards the end, which is more bothersome than anything supernatural. While I enjoyed 88 earlier this year and believe that April Mullen is a director to watch, Farhope Tower is a bit of a miss for her and Wango Films.