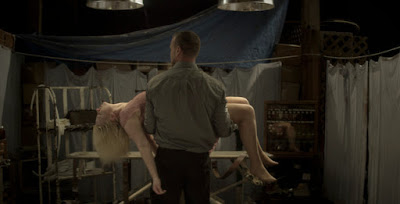 A group of five female filmmakers find themselves tormented at an isolated farmhouse in Save Yourself. Following a film premiere, director Crystal Lacroix (Tristan Risk), producer Dawn Sommerville (Lara Mrkoci), screenwriter Lizzy Miller (Caleigh Le Grand), and actress sisters Kim and Sasha Tobin (Jessica Cameron and Tianna Nori) are on their way to Los Angeles for their next screening. After stopping in a rest area, Crystal vanishes, resulting in the rest of the girls going off to look for her. They come across an isolated farmhouse occupied by Chris Sauter (Ry Barrett) and his wife Astrid (Elma Begovic), who turn out to be deranged Nazis hellbent on experimenting on the girls.

One thing that is immediately notable about Save Yourself is that the film has a very female-centric cast, with there only being about two major male roles in the film. While initially appearing helpful towards the girls, Chris Sauter quickly reveals himself as a deranged German scientist, whose work involves experimenting on young, beautiful women. As a result, these five young filmmakers have to band together and find a way to escape this madman.