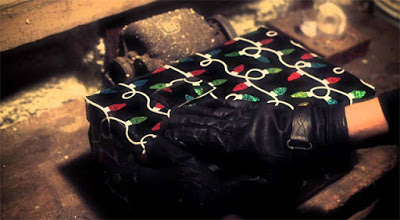 The Christmas party for a group of college kids is terrorized by a psychotic killer in Secret Santa. It is Christmas Eve and Olivia (Nicole Kawalez) is hosting a Secret Santa party for her friends Nicole (Annette Wozniak), Carissa (Keegan Chambers), Bryan (Brent Baird), Dwayne (Geoff Almond), and Oliva’s professor/boyfriend Preston Ramsey (Tony Nashed). However, in the shadows lurks a killer that will make sure that these friends don’t have a very Merry Christmas.

Secret Santa is a film that is a simultaneously a homage to the slasher films of the 1970s and 1980s, while also spoofing the familiar tropes of such films. When the film’s central protagonist has a job as a webcam girl, it can be safe to say that Secret Santa is not a slasher film that is playing by the rules. However, I probably wouldn’t go as far and call the film the next Black Christmas, since the film has a very low budget and DIY feel to it, That said, the film does have some pretty clever kills, which are accompanied by some decent gore effects.

For everything that Secret Santa gets right, there are also elements of the film that come off wrong. The film has a synthesizer score as homage to classic slasher films, though the high pitched cues don’t really sound right and the music is more distracting than atmospheric. Also, the plot of the film really begins to fall apart once it reaches the climax, including a time jump for no reason whatsoever. Part of the issues with Secret Santa comes from its desire to spoof and/or rip slasher films, instead of focusing on being a faithful homage to the genre. While Secret Santa turned out to be an OK effort, it could have been much better.