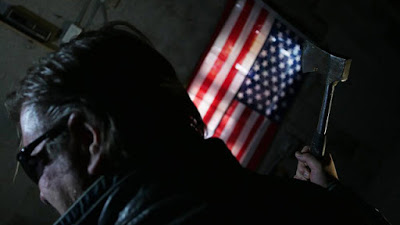 The short showcase for the 2015 Blood in the Snow Film Festival featured everything from monster vigilantes to killer salesmen to mermaids. Here is my rundown of the seven shorts that played as part of this showcase.

Birthday
A woman becomes a sacrifice to give birth to a powerful being.  Without a doubt, Birthday is a very stylish short, taking the form of a silent horror film, with some very trippy music. In many ways, this film can be seen as a horror version of a Guy Maddin film, which can either be a good thing or a bad thing, depending on how you respond to the style.

Deathbox
Vampire Sorin Gabor II (Ian Dyck) becomes prisoner of the vengeful vigilante N.C. (Timothy Paul McCarthy). Deathbox continues the adventures of Nash Caruthers, who originated in a bumper that played during the 2014 Toronto After Dark Film Festival. With his ‘Merican attitude, old N.C. shows absolutely no mercy is disposing those on his hit list. I would definitely like to see more of this character.

Kurayami no Wa
After a mass candy genocide, a trio of kids go on the run in a post-Halloween apocalypse. Kurayami no Wa is essentially a short film based on the Halloween rule that you “Always check your candy.” The film features kids in peril and even zombies and is somewhat interesting watch.

Marty
A travelling salesman named Marty (Danny Ghantous) reveals himself to be a psychopath. Marty is a dark comedy about this mustachioed salesman, who loves murder and Jefferson Airplane. Danny Ghantous is rightfully creepy in the lead role and the film as a whole is entertaining in a dark and macabre sort of way.

Aestas
Jean-Franois (Fred-Eric Salvail) save a girl from drowning, though she disappears on her way to the hospital. However, Jean-Franois later sees that the girl has apparently taken the place of his girlfriend Ariane (Marie-Ève Larivière). Aestas is smart little film about this man, who may or may not be losing his mind. The film has a somewhat clever ending, even if it’s a bit predictable.

Seirēn
Swimsuit model Abigail (Sayla V DeGoede) gets bitten by something in the water and begins to undergo a horrifying transformation. It might just be pure coincidence, but the plot of Seirēn has many similarities to the feature film Bite, except that it involves a totally different type of creature. Of course, horror films about getting bitten and undergoing transformations are a quite common occurrence. Overall, the film is quite well produced and features some well-done creature effects.

Return
Susan (Kathryn Aboya) and Harry (Mike Donis) move into a new house and are greeted by their unusual neighbour Tabitha (Astrida Auza), Return is a short film that has a bit of a Invasion of the Body Snatchers vibe to it, as Tabitha has sinister intentions for Susan and Harry. Astrida Auza is quite effective in her antagonist role of Tabitha, with her progressing from unusual to downright sinister. Altogether, Return is a well done thriller.