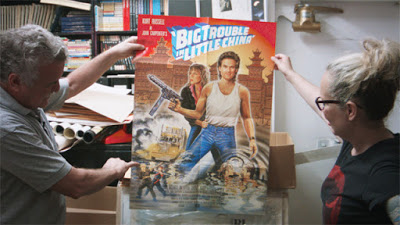 The lost art of movie posters is examined in 24×36: A Movie About Movie Posters. The invention of the movie poster came about after the invention of lithography as a way to market movies. During the prime period of the 1970s and 1980s, movie posters were illustrated works of art, created by the like of Bob Peak, John Alvin, and Richard Amsel. However, in the 1990s, studios began to move towards photoshopped “floating head” posters, which were nowhere near as artistic. This has lead to a recent renaissance, where independent artists create their own versions of classic posters.

24×36: A Movie About Movie Posters is a love letter to the lost art of movie posters. Seen only as marketing tools by studios, artists have never been given proper credit for their work, with the original paintings often disappearing after they are turned into posters. To make matters worse, a move was made towards generic “floating head” posters, which increase recognition by audiences, but cannot be called works of art. This has lead to the creation of companies such as MONDO, who create new illustrated posters for classic films.

If you ask the general public, they likely wouldn’t care how artistic a movie poster is. In fact, 24×36 features a focus group for a fictional film, which demonstrates that people will often choose the generic photoshopped poster over the illustrated one. At the same time, a huge collector culture has arisen, who purchase limited edition screen prints created by independent artists. Altogether, 24×36 is a must-watch documentary for collectors and cinephiles alike.