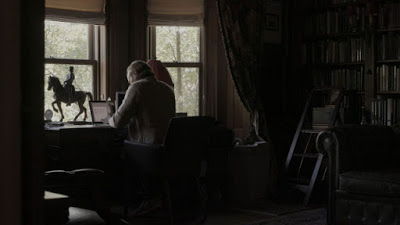 A troubled writer kidnaps a woman he believes to be his muse in Art of Obsession. Kennedy Sait (Ry Barrett) is a formerly successful writer, who has given in to drugs and alcohol following the death of his wife and child. On the verge of suicide, Kennedy is saved by a vison of a woman in the form of his neighbour Patricia Bailey (Winny Clarke), calling herself his muse. Unable to separate fantasy from reality, Kennedy ends up kidnapping Patricia when she comes to him for shelter from her abusive husband Doug (Brian McDonald). Chained up in his attic, Patricia is subjected to abuse to inspire Kennedy in his writing.

With a plot that can be seen as a reverse of the plot of Stephen King’s Misery, and its 1990 Rob Reiner directed film adaptation, Art of Obsession is a film that explores the pain and torment one goes through to create art. It is obvious early one that Kennedy Sait is mentally unstable, as he perceives his neighbour Patricia Bailey as a seductive figure, who appears in times of need and says limericks to him. It is soon revealed that Kennedy has been stalking Patricia for some time and his obsession turns real when he kidnaps her. However, things become complicated by the sudden arrival of Kennedy’s niece Jade (Raven Cousens) and the constant pestering from his drug dealer Melanie (Jessica Vano).

Art of Obsession is a very psychological type of horror film, as Kennedy allows his fantasies to spill into reality. His victimization of Patricia probably isn’t the easiest thing to watch, especially now we are in the #MeToo era. However, ultimately the film is about a man trying to find an outlet for his art, even if it means bring pain to others.