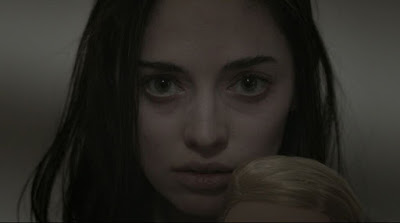 A young woman makes a dark choice following a miscarriage in Blood Child. While living is Singapore with her husband Bill (Biden Hall), Ashley (Alyx Melone) has miscarriage and loses her unborn child. Months later, Ashley and Bill have returned home to Minnesota and she soon receives the news that she is once again pregnant. However, with the help of black magic, Ashley has been secretly raising the ghost of her unborn child with the help of her Indonesian housekeeper Siti (Cynthia Lee MacQuarrie) and “Anna” is not happy about the new arrival to the family.

Blood Child is the debut feature film from writer/director Jennifer Phillips based loosely on true events that she experienced, as well as real Southeast Asian rituals that involve the raising of ghost children. The film can also be interpreted as being about the depression that mothers feel after losing a child, with Ashley becoming distant from Bill, which causes some strain in their marriage. Things soon begin to be looking up as Ashley finds out she is pregnant, however the ghost child that she has secretly been raising views this pregnancy as a threat.

Blood Child takes a while to truly get going, as it introduces elements such as Ashley’s somewhat annoying best friend Naomi (Charlotte Cattell) and Bill’s horndog friend Tom (Steve Kasan), who seems not be against extramarital affairs. Not the mention the racism directed at Siti, who has the habit of popping out of nowhere and scaring people. However, once the horror true gets going, Blood Child ends up being a quite solid supernatural thriller.