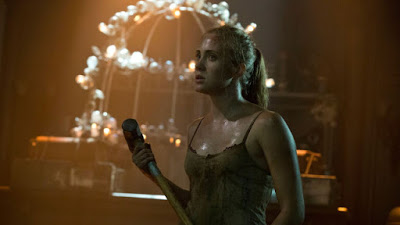 A young woman finds herself in a mysterious and violent world in Darken. Eve (Bea Santos) is a nurse, who finds a bleeding woman on the sidewalk outside a building. Instructed to go inside and tell Taro (Jon McLaren) the truth, Eve finds herself in Darken, a dark warehouse-like world, where the residents worship Mother Darken and her life-giving blood. Eve quickly joins up with exiles Kali (Oluniké Adeliyi) and Mercy (Zoë Belkin), who are on the run from the high priestess Clarity (Christine Horne) and her arbiter Martin (Ari Millen). As the first outsider to enter Darken in ages, Eve soon realizes that it may be her destiny to put an end Clarity’s tyrannical rule.

Director Audrey Cummings follows up her debut feature film Berkshire County with a high concept film that essentially tackles religious zealotry from a sci-fi/fantasy perspective. Darken features a notable ensemble cast that includes Bea Santos (Murdoch Mysteries), Ari Millen (Orphan Black), Christine Horne (Hyena Road), and Paul Amos (Lost Girl). The world of Darken is one that appears simply like warehouse of many rooms. However, they are all connected by the mysterious leader Mother Darken, whose disappearance drives the plot of the film.

While this isn’t a criticism of Darken pe se, but I do have to note that the film does come off at times like a pilot for a television series, which likely has to do with the script by RJ Lackie, which was originally 36 hours worth of shorts. Indeed, work has already begun on expanding the Darken universe with both an upcoming digital series and VR experience. However, on its own, Darken is still quite compelling science fiction fantasy.