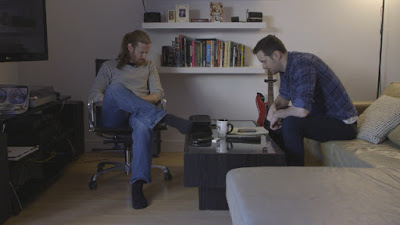 A documentary about the connection between movie violence and real life violence goes horribly wrong in Fake Blood. Rob Grant is an aspiring filmmaker, who makes low budget horror films with his actor friend Mike Kovac. After receiving a creepy fan video related to their film Mon Ami, Rob and Mike become concerned that the bloody violence they have in their films might be influencing real life killers. During their investigation of this connection, they come across a mysterious contact named “John,” who knows all too well the details of how killers thinks.

The line between reality and fiction is heavily blurred in the mockumentary Fake Blood. Featuring both real life incidents and fictional recreations, Rob Grant and Mike Kovac investigate the possible connections between movie violence and real violence. The film references actual incidents, such as the Aurora movie theatre shooting, and uses them as a jumping board for a film that quickly turns from a comical lark to something quite tense and terrifying.

The genius of Fake Blood is the fact that much of the film is truly a documentary, as Rob and Mike learn about real life violence through trips to the gun range and a dojo. However, when the two decide they must talk to criminals, it becomes harder to tell what is real and what is created for the film. Despite its documentary format, Fake Blood is truly horrifying at times and it really causes you to think about whether on-screen violence can influence real life violence.