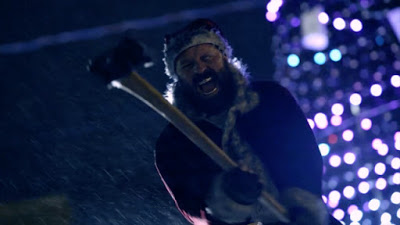 A small town is tormented by a pair of crazed killers in the twelve days leading up to Christmas in Once Upon a Time at Christmas. In the small town of Woodridge, a pair of killers dressed up as Santa (Simon Phillips) and Mrs Claus (Sayla Vee) have started killing people each night in increasing numbers. Sheriff Jim Mitchell (Barry Kennedy) and his deputy Sam Fullard (Jeff Ellenberger) scramble to find a reason for this killing spree. They soon find out that the connection may be local teenager Jennifer (Laurel Brady), who the killer is apparently targeting.

In the spirit of films such as Silent Night, Deadly Night and Black Christmas comes the holiday slasher film Once Upon a Time a Christmas by UK-born filmmaker Paul Tanter. Obviously inspired by the Joker and Harley Quinn, this killer Santa and Mrs Claus embark on a bloody killing spree on the days leading up to Christmas, with Jennifer being the apparent endgame. As Christmas Day approaches, Jennifer slowly learns the horrifying truth of why she is being targeted.

Once Upon a Time at Christmas is a very glossy and well-produced slasher film with some very bloody kills. However, I do think that the film is a bit mean spirited at times and almost expects you to cheer for the despicable acts committed by the axe and crossbow sporting killer Santa duo. I also have to note that the dialogue of the film is sorely lacking at times, with there being scenes that are drawn out to reach a conclusion you already know is coming. However, I do have to give props to the investigative duo of Barry Kennedy and Jeff Ellenberger, who are probably the most entertaining aspect of this film.