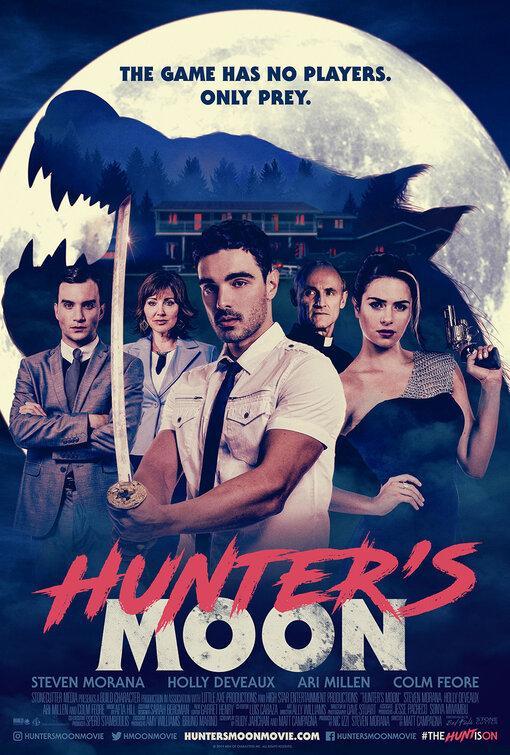 A video game launch party turns deadly with the arrival of an apparent werewolf in Hunter’s Moon. August (Steven Morana) is the lead programmer of the video game Werewolves Awaken Online, an adaptation of a card game created by Brian (Art Hindle). August and his friend Stan (Marco Timpano) are invited by publicist Remy (Ari Millen) to a video game launch party also attended by Brian’s girlfriend Nikki (Supinder Wraich), lawyer Veronica (Melissa D’Agostino), her husband Luke (Mark Andrada) and sister Betty (Katie Boland), as well as video blogger Natasha (Nicole Stamp), disapproving priest Father Roman (Colm Feore) and August’s online date Cheyenne (Holly Deveaux). However, it soon comes to be that someone or something has begun killing off the guests.

Hunter’s Moon is a horror film that combines the werewolf and slasher subgenres. When people start showing up dead at this party, August is initially skeptical at Stan’s assertion that there is a real-life werewolf on the loose, bringing the Werewolves Awaken game into reality. However, as the bodies begin to pile up, one thing for sure is that the killer is among the party guests and August, Stan, Cheyenne, and the others have to figure out which one of them it is before it is too late.

Hunter’s Moon is not the first film to combine the werewolf and slasher genres since the plot of the film reminds me greatly of Wes Craven’s Cursed from 2005. However, I would still say that Hunter’s Moon is still a semi-decent addition to the genre, which is well-shot and features many gory kills. However, a major criticism I have is the poorly written dialogue that comes off very unnaturally, as well as a very hip-hop sounding score that feels really out of place in a horror film. Overall, Hunter’s Moon is a merely passable film that could have been a whole lot better.