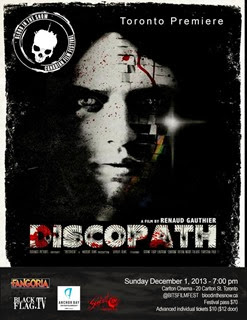 It is 1976 and Duane Lewis (Jérémie Earp-Lavergne) has a problem.  A traumatic childhood experience causes Duane to turn into a psychotic maniac whenever he hears disco music, brutally killing whoever is in his vicinity.  After the body of one of Duane’s victims is discovered in a nightclub, Duane makes a run for Montreal, in the hopes of escaping this affliction.  However, soon enough, the disco music starts playing and the killing starts all over again.  When New York police detective Paul Stephens (Ivan Freud), who has been tracking Duane of years, hears of the new killings in Montreal, he heads on over to the city, in the hopes of putting an end to this discopath once and for all. Discopath is pretty much what you would expect from a film about a man compelled to kill by disco music.  The film is very much in the style of exploitation films from the 1970s and it has a pretty impressive disco soundtrack.  At first, the film seems to be trying to get the audience to sympathize with this serial killer, especially when the film flashes back to Duane’s childhood and the source of his psychotic behaviour.  However, Duane quickly becomes a full-fledged villain, with Paul Stephens being the, somewhat obsessed, cop out to stop him. It should be noted that Discopath is a bilingual film and switches to being mostly in French around the second act.  While the change in language was a little unexpected, it didn’t deter from my overall enjoyment of the film.  The film features at times some quite extreme scenes of gore, which fits with the exploitation films that the film is emulating.  By the time the film got to a chase scene, set to KISS’ song “I Was Made for Loving You,” I can say that I was having a good time with the film. Discopath isn’t a particularly deep film, but I still thought that it was well-executed and an overall fun watch.  If there is a gripe about the film, it’s that there aren’t many well developed female characters.  While it’s probably a trope of the genre for most of the female characters to be introduced, only to be killed off, it still didn’t feel right that there wasn’t a proper female protagonist, even though a few characters are set up to be one.  That said, it’s not a huge nitpick and I can still say that I overall thought that Discopath was well worth the time.8 | LIKED IT