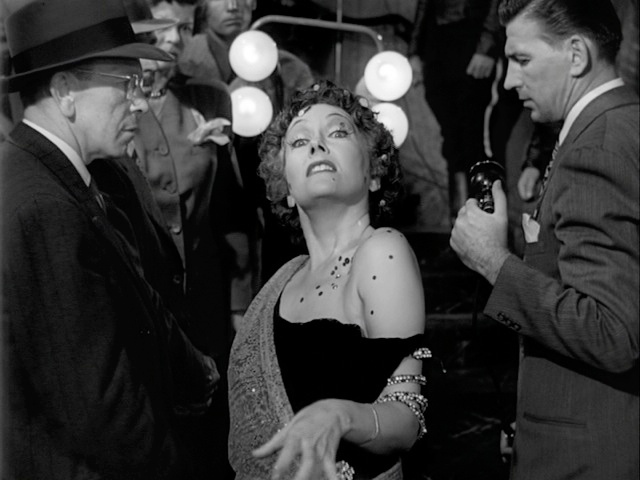 Last and definitely not least in my yearlong look at cult films from the 1950s to the 1970s is Billy Wilder’s award winning film noir drama Sunset Boulevard. While on the run from repossession men seeking his car, down on his luck screenwriter Joe Gillis (William Holden) stumbles into the mansion of faded silent film star Norma Desmond (Gloria Swanson), who lives alone in the mansion with her faithful servant Max (Erich von Stroheim). Joe finds himself hired by Desmond to help her work on a screenplay for a film about Salome, which she hopes to use to make a big screen return. However, when Joe begins to fall for script reader Betty Schaefer (Nancy Olson), it results in extreme jealousy from Norma Desmond.

Sunset Boulevard is one of those films ingrained in pop culture, thanks to its two iconic lines spoken by Norma Desmond: “I am big! It’s the pictures that got small” and “All right, Mr. DeMille, I’m ready for my close-up.” Both of these lines illustrate the highly delusional nature of Norma Desmond, who refuses to accept the fact that there is no longer any place for her in Hollywood. This delusion is sustained by Demond’s servant Max, memorably played by filmmaker and actor Erich von Stroheim (Grand Illusion), who is worried about her fragile mental state.

Indeed, Sunset Boulevard is set up as a film noir styled tragedy, as the plot of the film begins with Joe’s dead body floating in a swimming pool and the whole film is him narrating the events that lead up to his eventual murder. While Joe is quick to clue in to the very obsessive nature of Norma Desmond, he is also quite receptive to the benefits of living with a rich movie star. It is in this regard that his budding relationship with Betty Schaefer almost seems doomed from the start and their final scene together in the film is particularly painful.

The casting of Gloria Swanson as Norma Desmond is more than a coincidence, since Swanson’s own career as a successful silent film star mirrored Desmond’s. In fact, the film has a key cameo by Cecil B. DeMille, who helped make Gloria Swanson a star. The film also features a scene of Norma Desmond playing Bridge with her acting friends, which include Buster Keaton, Anna Q. Nilsson, and H. B. Warner.

Probably the most iconic moment of Sunset Boulevard comes right towards then end when Norma Desmond has a full on mental break and walks directly towards the camera. It’s quite easy to watch Gloria Swanson’s performance in this scene and call it campy. However, the entire film has been building up to this point, as Joe has been repeated advised by Max to be careful not to fracture Desmond’s illusion that still admired by fans.

It is interesting to note that even though Sunset Boulevard received an astonishing 11 Oscar nominations, including Best Picture, Director, and all four acting categories, it only ended up winning three for its Screenplay, Art Direction, and Music. However, it is undeniable that Sunset Boulevard has survived the test of time as one of the true cinema classics.