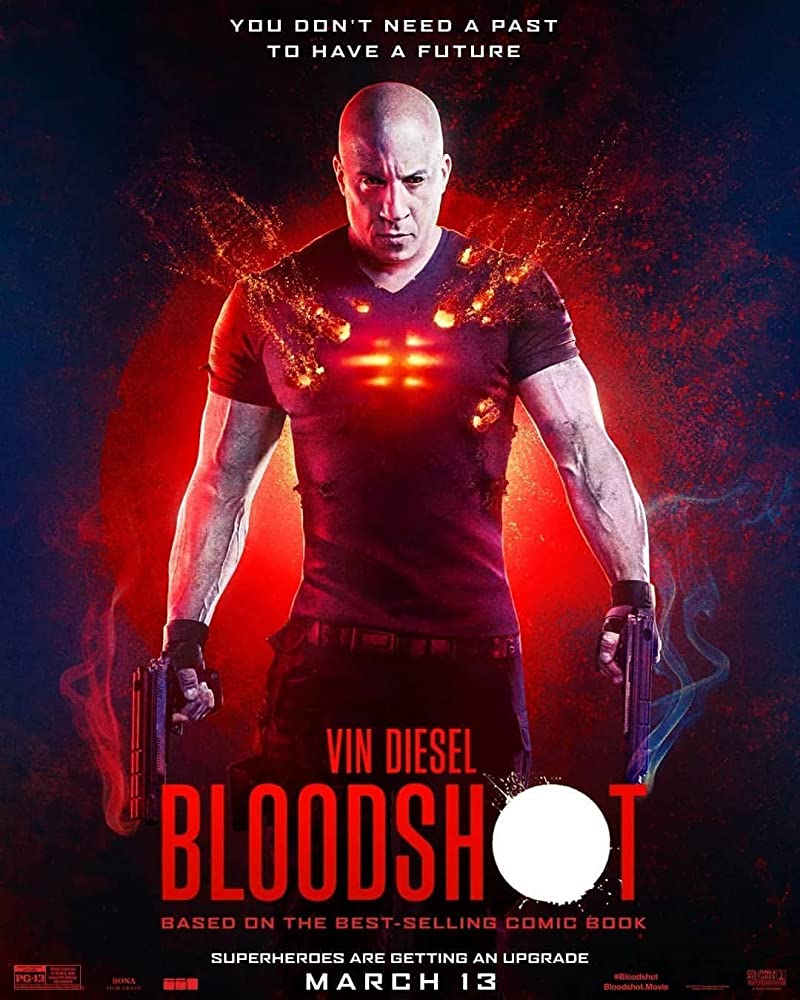 A slain soldier is brought back as a near-invincible killing machine in Bloodshot. Ray Garrison (Vin Diesel) is a US marine, who finds himself and his wife Gina (Talulah Riley) kidnapped by a group of mercenaries lead by Martin Axe (Toby Kebbell), who ends up killing them both. However, Ray later wakes up in the lab of Dr. Emil Harting (Guy Pearce), whose company Rising Spirit Tech has developed a special nanite technology, which replaces Ray’s blood with microscopic robots that rapidly repair damaged tissue. Ray is joined by RST’s other patients including KT (Eiza González), Jimmy Dalton (Sam Heughan), and Marcus Tibbs (Alex Hernandez), with Ray quickly developing a connection with KT. After receiving memories of his wife’s murder, Ray develops a vengeful vendetta against Martin Axe, however, it soon becomes apparent that not all is what it seems.

Bloodshot is a sci-fi action film directed by first-time filmmaker David S.F. Wilson, based on the Valiant comics of the same name. The film stars Vin Diesel as a US marine, who is killed in action and is brought back to life as a near-invincible killing machine. It isn’t long until Ray develops a thirst for vengeance against the man who killed his wife, though it soon becomes apparent that Ray’s memories of the events are being manipulated by Dr. Emil Harting, turning Ray into his own personal assassin. However. it is not long until Ray clues into what’s going on and with the help of hacker Wilfred Wigans (Lamorne Morris), Ray prepares to turn the tables on the man controlling him.

Even without the comic book origins, Bloodshot isn’t exactly the most original of stories, with the plot containing elements of everything from Robocop to Universal Soldier to even The Matrix. In addition, the marketing for Bloodshot gives away the big second act reveal that Ray Garrison is being manipulated and you are left waiting throughout the first half of the film for Guy Pearce’s character Dr. Emil Harting to be unveiled as the true villain of the story, even though seeds are planted through the immense antagonistic relationship between Ray and fellow augmented soldier Jimmy Dalton, who becomes a real scenery-chewing villain as the film progresses.

It is obvious that Bloodshot was meant as a launching point for Vin Diesel’s own superhero franchise. However, outside of the forever-running Fast and Furious series and possibly the Riddick films, Vin Diesel alone has never been able to launch a franchise and Bloodshot seems like it is destined to be a one and done film. However, the film still makes for a solid way to waste an afternoon.

Bloodshot is now available on Blu-ray and VOD platforms