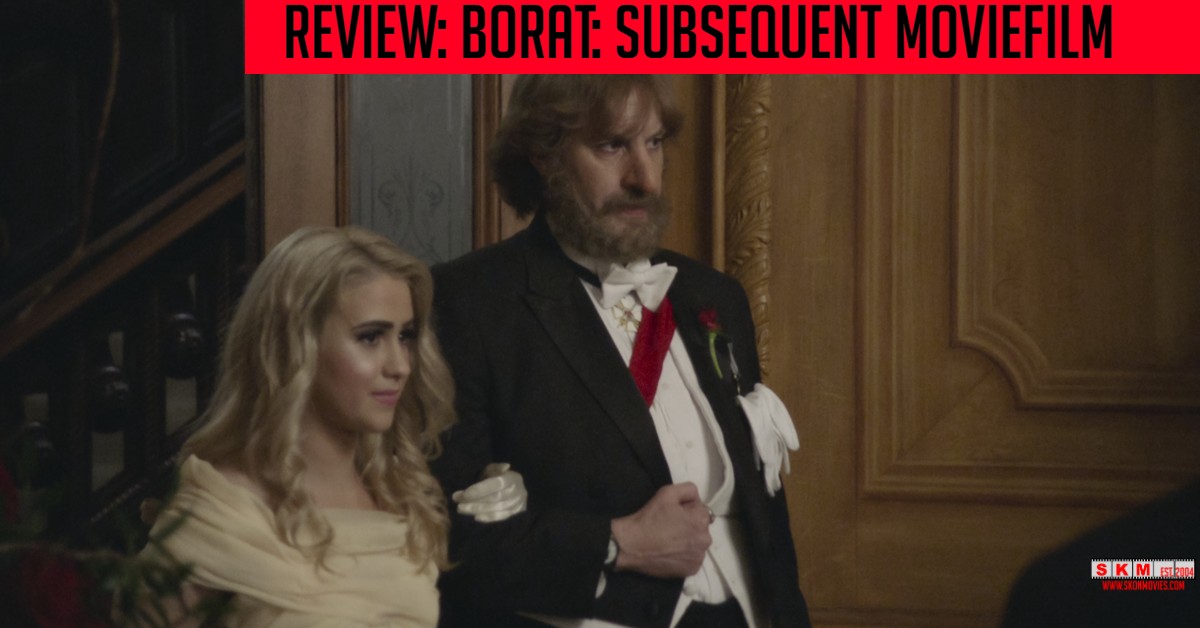 Sacha Baron Cohen unleashes his Kazakhstani news reporter on more unsuspecting Americans in Borat Subsequent Moviefilm: Delivery of Prodigious Bride to American Regime for Make Benefit Once Glorious Nation of Kazakhstan. Fourteen years after his first trip to America, Borat Sagdiyev (Sacha Baron Cohen) finds himself an embarrassment to his country of Kazakhstan. As a chance for redemption, Borat is assigned by President Nursultan Nazarbayev (Dani Popescu) to return to America and present a gift to Vice President Michael Pence. Initially, the gift was to be the prized chimp Johnny, but Borat has to make do with his teenage daughter Tutar (Maria Bakalova), who stowed away in Johnny’s crate.

Borat: Subsequent Moviefilm arrives fourteen years after the original 2006 mockumentary made a household name out of Sacha Baron Cohen’s character of Borat Sagdiyev, who originated from Da Ali G Show. While initial plans for a sequel were canceled, due to the character becoming too recognizable, Sacha Baron Cohen and director Jason Woliner (Human Giant) secretly produced the film in the midst of the 2020 COVID-19 pandemic, with the film adding the plot element of Borat having to wear various disguises to avoid being recognized.

Just like the original film, Borat: Subsequent Moviefilm features a basic narrative that provides an excuse for the character to interact with various individuals all around America. This time around, the secondary protagonist comes in the form of Borat’s 15-year-old daughter Tutar, played by Bulgarian actress Maria Bakalova. Beginning as the typical subservient woman, typical of the fictional Kazakhstani, Tutar slowly begins to learn over the course of the film that women in America are able to make their own choices.

Of course, the plot of Borat: Subsequent Moviefilm to reveal the dark underbelly of America, as unsuspecting people are filmed in compromising situations. This includes an uncomfortably hilarious scene of Borat and Tutar visiting a Christian doctor, after Tutar accidentally swallows a plastic baby, and she is encouraged to “keep the baby,” despite Borat’s repeated insinuations of incest. Other standout scenes include Sacha Baron Cohen as Borat infiltrating a Republican rally dressed as Donald Trump and “Country Steve” singing an incredibly racist song during another rally in the midst of COVID-19. The scene that will probably go down as the most controversial moment of Borat: Subsequent Moviefilm is how the film captures former New York mayor, and current Donald Trump ally, Rudy Giuliani in a very unflattering way.

Frankly, it is amazing in and of itself that Sascha Baron Cohen was able to get away with making a second Borat movie, especially in this much more digital age we live in. While the concept is not as fresh as it was in 2006, I still thought that Borat: Subsequent Moviefilm was an incredibly funny film, though in all the wrong ways.