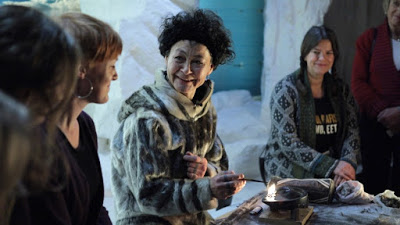 The Inuit community fight back against anti-sealing campaigns endangering their way of life in Angry Inuk. Hunting for seals is a necessary part of Inuit life in the Canadian arctic, both for food and income. However, animal rights organizations have been campaigning for decades against the commercial seal skin industry, without realizing that reducing the demand for seal skins hurts the Inuit economy. Filmmaker Alethea Arnaquq-Baril makes it her cause to fight back against the animal activists endangering their way of life.

Since the 1960s, animal rights groups, such as Green Peace and the International Fund For Animal Welfare have protested against seal hunting, which has resulted in the passing of laws banning the trade of seal skin. Even though the animal rights groups claim that the Inuit are exempt from these laws, the value of seal skin has dropped so much that it becoming extremely difficult for the Inuit to maintain their traditional way of life.

Angry Inuk is an extremely informative documentary that looks at how a supposedly noble cause is causing more harm than good. These animal rights groups fight against the commercial trade of seal skins, even though the Inuit rely on this industry to maintain their way of life. There are a lot of questions asked in this film, such as whether seals are the subject of these campaigns simply because they are cute? Altogether, Angry Inuk is worth checking out to see the other side of the anti-sealing debate.