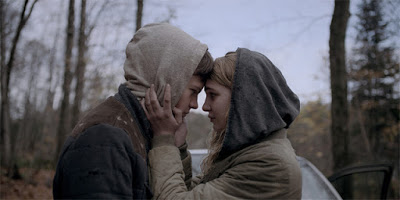 Two young lovers go on the run from their abusive lives in Mean Dreams. One day, young ranch hand Jonas (Josh Wiggins) meets Casey (Sophie Nélisse), who has just moved into the area. The two quickly strike up a friendship, which seems to be blossoming into romance. However, Jonas discovers that Casey’s police deputy father Wayne (Bill Paxton) is an abusive alcoholic, who regularly beats on Casey. After witnessing Wayne steal nearly a million dollars during a drug deal, Jonas takes the money and goes on the run with Casey, wity Wayne and the police chief (Colm Feore) on their trail.

For his sophomore feature film, director Nathan Morlando (Edwin Boyd) presents a film that is a combination of forbidden teen romance and crime thriller. At the centre of the story are the young lovers of Jonas and Casey. Despite the warnings of Casey’s abusive father Wayne to stay away from his father, Jonas remains persistent, with the desire to protect his new girlfriend. However, as the two go on the run together, the real world turns out to be a very mean place.

Mean Dreams is quite a solid film that effortlessly transitions from the romance it starts off as to and edge on your seat thrill. The plot of the film is nearly completely depended on the performances of young actors Josh Wiggins and Sophie Nélisse, who are present for the bulk of the film’s screen time. However, the film also has a very intense performance by Bill Paxton, who is great at playing both a loving father and abusive drunk. It’s a shame Colm Feore as The Chief doesn’t have more screen time, but he is always a welcome presence. Altogether, Mean Dreams is a quite well executed teen romance thriller.