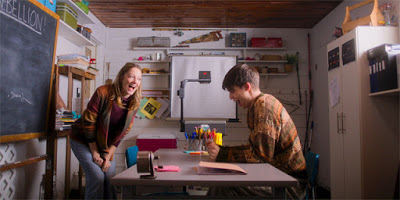 A home schooled teenager enrolls into public school for the first time in Adventures in Public School. For most of his life, Liam (Daniel Doheny) has been home schooled by his enthusiastic mother Claire (Judy Greer). However, when Liam enters the local high school for his final exam, he is immediately infatuated with one-legged girl Anastasia (Siobhan Williams). As such, he personally fails the exam, so he can enroll into the high school and pursue the girl of his dreams.

Adventures in Public School is an extremely quirky teen comedy about a young man experiencing public school for the first time. Liam was all set to finish his home schooling and go to college at Cambridge, however he decides that he wants to experience public school for the first time, especially after he spots Anastasia in the hallway. During his few months in public school, Liam pursues the girl of his dreams, gets tormented by the Australian bully BDC (Andrew Herr), and gets advice from guidance councilor Mr. Germaine (Russell Peters).

Adventures in Public School is a film that you are either going to dig or loathe with every inch of your body. The film is perhaps a bit too quirky at times and it filled with pretty much every teen movie cliche in the book. As a home schooled teen, Liam is the epitome of white male privilege, who only really pursues public school to “get the one-legged girl.” While Adventures in Public School is a fine enough film, it is ultimately not something that I would fully recommend.
6 / 10 stars