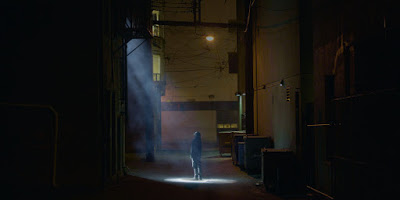 The stories of five Vancouverites are told under the backdrop of the 2010 Winter Olympics in LUK’LUK’I. It’s February 28, 2010 and the puck is about to drop on the Gold Medal hockey game between Canada and the USA. However, away from the spectacle of the Olympics, a number of individuals have their own experiences in the Downtown Eastside. These individuals includes mother and part-time sex worker Angel Gates, transgender celebrity Angela “Rollergirl” Dawson, heroin addicted landscaper Eric Buurman, the UFO obsessed Mark (Joe Dion Buffalo), and disabled man Ken (Ken Harrower). The experiences of these individuals stands in contrast to the Olympic circus going on around them.

LUK’LUK’I is the debut feature film by Métis filmmaker Wayne Wapeemukwa, expanded from his 2014 short film Luk’Luk’I : Mother. Wapeemukwa cast real individuals as fictionalized versions of themselves to show life in the Downtown Eastside of Vancouver under the backdrop of the final day of the 2010 Winter Olympics. In many ways, the film shows are darker side of Vancouver, which was hidden from the global spectacle of the Olympics.

Since LUK’LUK’I is a hybrid of fiction and reality, there is an almost documentary feel to the film at times. However, there are also a number of cinematic touches to the film, such as the character of Mark always spotting UFOs, a karaoke sing-a-long, or Ms Rollergirl doing a choreographed routine. Without a doubt, LUK’LUK’I is in no way a conventional type of film, but it is still one that is worth checking out.