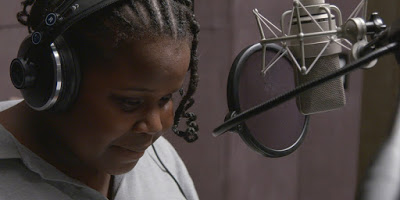 A girl living in a community housing project learns to develop her own voice in Unarmed Verses. Francine Valentine is a teenage girl living with her father and grandmother in a community housing project in the north of Toronto, which is in the midst of a “revitalization” plan. Francine participates in a songwriting program put on by a local community organization and she slowly learns to come out of her shell.

Unarmed Verses is a documentary from director Charles Officer (Mighty Jerome), which spends time in a predominantly black Toronto community, which is undergoing some major changes. The primary subject of the film is Francine Valentine, a very soft-spoken, yet intelligent girl observing the gentrification going on around her. As part of a songwriting group, Francine has to learn to overcome her shyness and put her written words to song.

It seems that Charles Officer is attempting many things with Unarmed Verses. On one hand he is telling Francine Valentine’s story, but he is using that story to comment on the larger issue of revitalization, as the community is forced to move out while their homes are replaced with condos and townhouses. In a very roundabout way, Unarmed Verses is a film that is showing life in a community that didn’t really need to be gentrified.