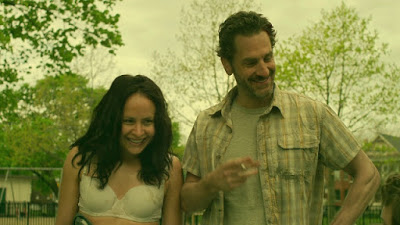 Two lowlifes try to scam their way into $98 for bus money in The Go-Getters. Owen (Aaron Abrams) is a deadbeat drunk, who is bunking in the boiler room of the bar owned by his brother Kevin (Kristian Bruun). Owen crosses paths with junkie hooker Lacie (Tommie-Amber Pirie) and despite the fact that they can’t stand each other, they both come up with a plan to travel to Lacie’s hometown of Brockville for a new life. However, the problem is that the bus fare costs $98 and both of them are broke.

While The Go-Getters have a relatively simple plot of two lowlifes trying to scam for money, the film ends up being quite entertaining thanks to the chemistry between Aaron Abrams and Tommie-Amber Pirie. Owen and Lacie try every scheme possible to earn money for their bus fare, with the plans often backfiring in hilarious fashion. With a stacked cast that includes Kristian Bruun (Orphan Black), Christine Horne (Hyena Road), Amy Jo Johnson (Power Rangers), and Scott Thompson (Kids in the Hall), The Go-Getters is a comedy that I quite recommend.