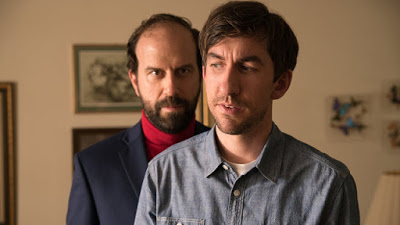 A broke ex-lottery winner finds his life being ruined by a roomer in his parents’ house in Room for Rent. Just as he was finishing high school, Mitch Baldwin (Mark Little) won $3.5 million in the lottery. However, Mitch ends up squandering the money on bad investments and is now a broke 32 year old still living with his parents. In an effort to save some money, Mitch convinces his parents to put the spare room in their house up for rent, which is quickly responded to by Carl Lemay (Brett Gelman). However, it soon turns out that Carl may have a hidden agenda, as Mitch’s life becomes a living hell.

Room for Rent is comedy from writer/director Matthew Atkinson about a broke 30-something, who finds his world being turned upside down by the vaguely sinister man who rents a room at his parents’ house. After winning the lottery, Mitch burned a lot of bridges in his personal life, including breaking up with his then-girlfriend Lindsay (Carla Gallo). However, as he begins to deal with the invasion of Carl into his life, Mitch begins to reflect on the type of person he was.

It doesn’t take long to know where the plot of Room for Rent is going, as it is quickly apparent that Carl Lemay is up to know good when he suddenly shows up at Mitch’s parents house and offers to pay the rent in cash. It is a bit frustrating at times that Carl is manipulate the people in Mitch’s life, making his life a living hell. However, things turn alright by the end and there’s even some life lessons to be learned.