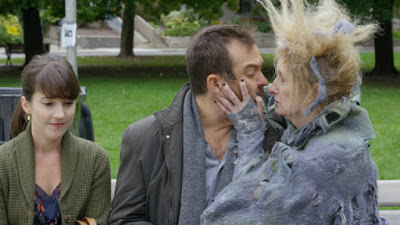 Here are my thoughts on a selection of shorts playing at this year’s Canadian Film Fest.

Prom Night
As their daughters head off to prom, three father’s begin to worry when they find a pregnancy test in the trash. Prom Night is a comedic look at every father’s nightmare, that being discovering the possible promiscuity of their daughters. This short has a very sitcom level of humour, but is ultimately an entertaining watch.

Before the Day
Ray (Paul McGillion) and his younger brother Danny (Steve Belford) go out on the town before a life changing event. Before the Day keeps the life changing event somewhat ambiguous, but as the film begins with Danny shaving Ray’s head, it’s not too difficult to guess what it is. Before the Day actually gets to fit a lot of plot into its 7 minute running time, as it shows the bonding between these two siblings over the course of a night.

Martin’s Hagge
Martin (Paul Braunstein) is middle-aged writer constantly put down by his pestering Hagge (Sheila McCarthy). However, with the introduction of his new co-worker Norah (Martha MacIsaac), Martin slowly frees himself from the Hagge’s grip. Written by Gordon Pinsent, who makes a brief appearance towards the end, Martin’s Hagge is an excellent film that visualizes the negative thoughts experienced by someone suffering from anxiety and depression. As someone with such a condition, the Hagge’s nagging really hit home for me, though the film leaves you with hope that this mental illness can be beaten.

Must Kill Karl
During a house party, all the guests are so annoyed at the presence of mustachioed jerk Karl (Mike Lobel), that they decide that they must die. Every group of friends likely has the one person, who often shows up to gatherings uninvited and acts like a complete asshole. Must Kill Karl is a comedy that plays up the frustrations that people feel about such people, with a very dark and hilarious edge.