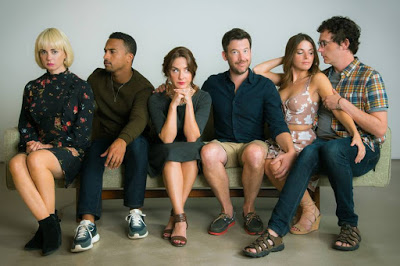 Things go awry when three couples decide to go swinging in A Swinger’s Weekend. Dan (Randal Edwards) and Lisa (Erin Karpluk) are a seemingly perfect couple, who decide to spice things up with a swinger’s weekend with their hot and young friends Teejay (Michael Xavier) and Skai (Erin Agostino). However, things start to go awry with the unexpected arrival of Geoffrey (Jonas Chernick) and Fiona (Mia Kirshner), which complicates what was supposed to be a carefully planned weekend.

Nothing says comedy like a film about couple sharing! A Swinger’s Weekend is the debut feature film from writer/director Jon E. Cohen and co-writer Nicola Sammeroff. The three couples at the centre of the story each have their own reasons to participate in this weekend. Dan and Lisa want to try to for the thrill, Teejay and Skai seem already into the lifestyle, and Geoffrey wants to participate as an extreme way to save his marriage with Fiona. While this is a weekend meant for casual, no strings attached sex, things quickly become much more complicated.

If anything, A Swinger’s Weekend can be viewed somewhat as a character study about how each of these couples handle participating in a couple sharing weekend. It becomes apparent that Dan and Lisa’s marriage might not be perfect and that ironically Teejay and Skai might be the most stable couple of the three. Dan in particular steadily reveals himself to be quite the jerk and that he likely had ulterior motives for participating in this weekend. Overall, A Swinger’s Weekend is far from perfect, but still an interesting character study.