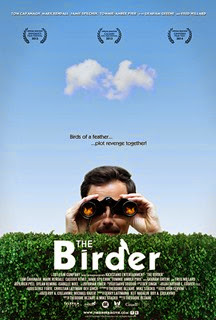 The comedy film The Birder focuses on Ron Spencer (Tom Cavanagh), a bird-loving high school teacher, who is expecting to be named “Head of Ornithology” at the local birding park and spend the summer bonding with his teenage daughter Samantha (Cassidy Renee). However, Ron is shocked when the Park President (Fred Willard) instead gives the position to a young hotshot by the name of Floyd Hawkins (Jamie Spilchuk), who was hired to attract the “young and hip” to the park.  Distraught over losing his dream position, and forced to squat in the high school after being kicked out by his ex-wife, Ron teams up with the school janitor Ben (Mark Rendall) to find a way to sabotage Floyd, so Ron can claim the Head of Ornithology” position for himself. The Birder is a classic story of generational rivalry, with the older, mild-mannered traditionalist going against the younger, charismatic hotshot.  The Head of Ornithology position has been a role Ron has been pining for all his life and he’s not going to let this young kid take his dreams away from him.  Of course, Ron’s mind isn’t exactly in the clearest state, since he was recently evicted by his ex-wife to make room for her new boyfriend.  Ron had hoped to use the summer to bond with his daughter Samantha, who’s working at the park, but is distraught when he sees her spending more time with Floyd.  This allows Ron to be influenced by Ben, whose old girlfriend is courting Floyd, and concoct a plot of revenge. On its own, a comedy about bird watching would be funny enough. However, the addition of the revenge plot and a deadpan performance by Tom Cavanagh (Ed, Breakfast with Scott) helped to make The Birder an overall enjoyable watch.8 | LIKED IT