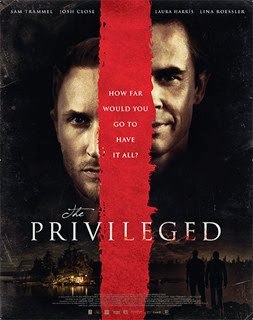 Richard Hunter (Joshua Close) is a young lawyer for prestigious firm.  When he loses a case, after refusing to present a questionable piece of evidence, his boss Preston Westwood (Sam Trammell) is instructed to fire Richard by the end of the weekend.  However, since Richard had high hopes for the future, he and his pregnant wife Tara (Lina Roessler) travel up to visit Preston and his wife Julia (Laura Harris) at their lakefront cottage, so Richard can explain the situation and beg Preston to keep his job.  However, Richard and Tara find themselves caught up in a feud between the Westwood’s and a trio of brothers, who own the only other cottage on the island.  When things get violent, Richard and Tara have to decide how far they are willing to go. The Privileged is a morality thriller, with additional themes involving wealthy individuals and how they think that they can do whatever they want and get away with it.  The entire plot is kicked into motion by Richard’s reluctance to “get his hands dirty,” in order to get ahead in his career.  However, when the stakes are high and your survival is at stake, morality is something that can easily be thrown out the window.  Despite their friendly exteriors, it is quite obvious that Preston and Julia are willing to do anything to maintain their way of life and they expect Richard and Tara to follow suit. The Privileged is well-made thriller, which goes into many dark places.  While the main theme of the film is “how far would you go,” there is also the quite scary undercurrent, involving how rich people can get away with pretty much anything, just because they “know people.”  Viewers of this film might leave with a bit of a bad taste in their mouth, but that doesn’t make The Privileged any less enthralling.8 | LIKED IT