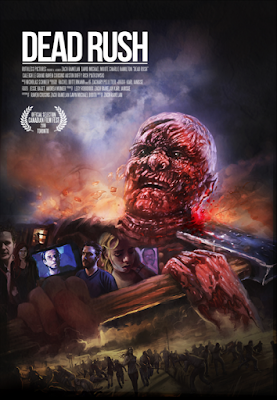 A zombie apocalypse is shown from one man’s point of view in Dead Rush. A viral outbreak has broken out and soon leads to a full out zombie apocalypse. The events before, during, and after the outbreak and shown through the eyes of David (David Michael Moote), who finds himself shacked out with a group of survivors, who are desperate to locate an apparently immune girl, who might hold the cure to to the zombie infection.

The feature film debut of director Zachary Ramelan, Dead Rush is an expansion of his 2013 short film of the same name. The entirety of the story is presented from the point-of-view of the protagonist David, with the film presented in a first person perspective. A lot of care has obviously been taken to shoot the film in this method, with the film flawlessly including shots of David looking in mirrors or recording video messages on his phone. The film definitely receives some points for originality in this regard.

I have to say that while I enjoyed the original Dead Rush short film, I am not entirely sure if the concept works as a feature. It is obvious that the style of this film is meant to mimic first person shooter video games, complete with point of view zombie killing. While the film indeed has scenes like that, they are few and far between. The bulk of the film consists of dialogue-heavy scenes, which are just shown from a first-person perspective. It is also hard to fully relate to David, since he is merely a disembodied voice for much of the film. However, even though it’s not as much as a rush I wanted it to be, Dead Rush is still a unique zombie film worth checking out.