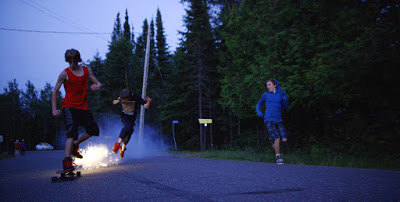 A trio of teenage boys come of age one summer in an Ontario cottage community in Sleeping Giant. Adam (Jackson Martin) is a 15 year old boy spending his summer in a sleepy cottage community. Adam is friends with Riley (Reece Moffett), though he also has to hang out with Riley’s foul-mouthed and rude cousin Nate (Nick Serino). The three spent much of the time doing pranks, lighting fireworks, and smoking weed, however some conflict is caused when Adam and Riley begin competing for the affections of a girl named Taylor (Katelyn McKerracher), which threatens to split the three apart.

Sleeping Giant is the debut feature film for filmmaker Andrew Cividino and is an expansion of the short of the same name that was released last year. The name of Sleeping Giant is in reference to a formation on the Sibley Peninsula near Thunder Bay, which plays a major role in the film, with the boys being in awe of the legendary “Todd’s cliff,” a 100 foot drop, which has only been jumped off by two people (one of them being Todd).

While the feature has some similar plot beats from the short, this version of Sleeping Giant is very much its own thing. The central protagonist of the three teens is Adam, who has to deal with many issues throughout the summer, including his father’s possible affair and his unrequited attraction towards Taylor. In addition to the great and realistic coming-of-age story, Sleeping Giant also features some great cinematography of its Northern Ontario landscapes. When it is all said and done, Sleeping Giant can’t be considered as anything else other than an absolute masterpiece and one of the best films of 2015.