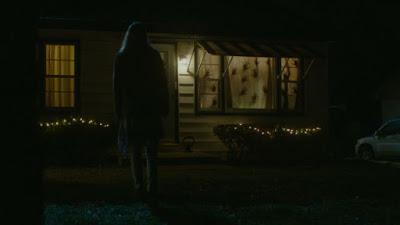 A teenage girl is tormented by spirits in Anguish.  Tess (Ryan Simpkins) has been suffering from psychological disorders for much of her life, which really concerns her mother Jessica (Annika Marks).  While the doctors have diagnosed her with dissociative identity disorder, in actuality Tess is tormented by spirits that surround her.  In particular, Tess is haunted by the spirit of a deceased teen named Lucy (Amberley Gridley), who is still being grieved for by her mother Sarah (Karina Logue).

A producer on films such as The Strangers and Shutter, Sonny Mallhi makes his directorial debut with Anguish.  This is actually a film that is hard to classify under a single genre.  While there is some very real tension in the film, as Tess is haunted by the spirits around her, the film can almost be described better as a mother-daughter drama than a horror film.  In many ways this is for the better, since Anguish grounds the story more in reality, without relying too much on genre cliches.

The plot of the film involving Tess being tormented by spirits is somewhat reminiscent of Insidious, except in a much more low key and less stylized fashion.  If there is a gripe I have about Anguish, it is the use of the overused “inspired by true events” tag right before the end credits.  Even if the film truly was based on a real individual, adding that tag will likely cause many to prejudge the film, which is is quite unlike many films with that description. Altogether, Anguish is a compelling drama with chilling supernatural elements.