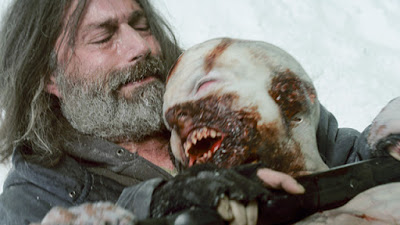 Two men and a young girl try to survive in a post-apocalyptic frozen wasteland in Extinction.  Nine years after a zombie apocalypse, the world has frozen over and all of humanity appears to be extinct.  Jack (Jeffrey Donovan) tries to live a relatively normal life with his daughter Lu (Quinn McColgan), while Patrick (Matthew Fox) lives a more survivalistic existence, accompanied by only a dog and alcohol.  Despite Jack hating Patrick over what happened to Lu’s mother Emma (Valeria Vereau), they must reluctantly team together when evolved cannibalistic creatures decent upon them.

Extinction is a post-apocalyptic drama, which comes across as a mix between The Walking Dead and I Am Legend.  While the film features some gory fights with the creatures, who look and act similar to the monsters from The Descent, the bulk of the plot of the film is about the fractured relationship between Jack and Patrick.  Jack tries his best to live a normal life with his daughter Lu, while Jack has all but given up up life, consuming copious amounts of alcohol and making nightly crazed radio broadcasts.

Probably one of the most impressive elements of Extinction is the performance by Quinn McColgan as Lu, who can be arguably be seen as the true protagonist of the film.  Despite Jack’s attempts to shelter her from this world, Lu remains an independent and curious person, who somehow relates more with Patrick.  The film utilizes flashbacks to show the sequence of events of how Jack and Patrick had their falling out, while they slowly reconcile to fight the common threat of the creatures.  While the film saves most of the gory violence for the final act, Extinction is still a quite compelling post-apocalyptic drama.