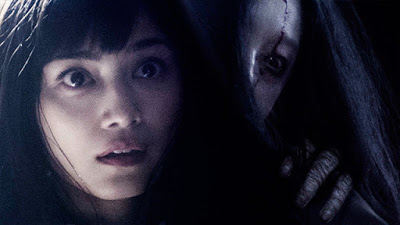 The classic J-horror series returns for a final scare in Ju-On: The Final Curse. After her sister Yui Shono (Nozomi Sasaki) goes missing, Mai (Airi Taira) begins to investigate her disappearance. The investigation leads Mai to Yui’s student Toshio (Kai Kobayashi). As the investigation continues, the curse surrounding Toshio and his mother Kayoko reveals itself, affecting all who come in contact with them, including Mai’s boyfriend Sota (Ren Kiriyama) and Toshio’s cousin Reo (Ono Nonoka).

It was back in 2002 when Takashi Shimizu’s Ju-On became one of the hits of the J-horror craze, leading the successful 2004 remake The Grudge.  The Ju-On series continued in Japan through 2009, before the series was rebooted last year with Ju-On: The Beginning of the End, directed by Masayuki Ochiai (Shutter).  Ju-On: The Final Curse directly follows the plot of that film, focusing on the sister of the previous entry’s protagonist. Even though I haven’t seen any of the Ju-On films since the first, it does seem apparent from Ju-On: The Final Curse that the series has become a very formulaic parody of itself. There’s the gurgling lead villain of Kayoko, the shirtless cat boy of Toshio, and the multiple individuals who meet grim fates after coming in contact with these vengeful spirits.

There’s nothing particularly new or interesting about this installment, other than the fact that the curse continues even after Kayoko’s house was destroyed. Also, even though the film is titled Ju-On: The Final Curse, the actual plot suggests otherwise. While there are a few pretty cool, and violent, deaths in the latter half of the film, for the most part this is a very dull and underwhelming story. Altogether, Ju-On: The Final Curse is a quite disappointing “final” chapter of a past-its-prime J-horror franchise.