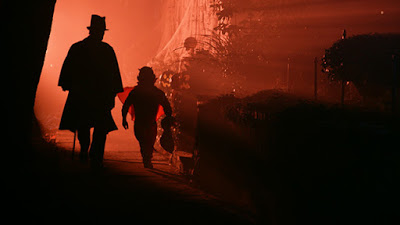 Tales of Halloween teams together a number of notable horror directors together for an anthology tale set on one Halloween night. Unlike a film like Trick ‘r Treat, which interweaves its multiple stories, Tales of Halloween is told in the classic Creep Show style, with the stories being 10 mostly independent short films, even though there is some crossover of characters. With a length of only 92 minutes, each other these stories are not much more than 9 minutes in length, which really only allows for a set-up, followed by a big scare or gag.

As is the case with many anthologies, Tales of Halloween is a mix of some really great horror stories, with others than don’t quite work. Some of the high points of the film include the Grim Grinning Ghost by Axelle Carolyn, which has the best ending of the bunch, the extremely gory and humorous slasher homage Friday the 31st by Mike Mendez, and the concluding story Bad Seed by Neil Marshall. Some familiar faces appear throughout the film, including Greg Grunberg, Barry Bostwick, and cameos by legendary directors John Landis and Joe Dante. While Tales of Halloween has a few high points, altogether it is merely just an OK anthology film.