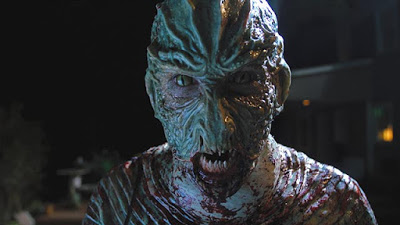 A troubled teen becomes an amphibious were-monster in Bad Blood. One night when out with her friend, Victoria Miller (Mary Malloy) is attacked and seriously injured by some sort of creature. She is helped by a mysterious, yet helpful gas station attendant (Vikas Adam), who has developed a serum that can halt Victoria’s transformation at the next full moon. However, when Victoria’s stepfather smashes the vial believing it to be drugs, Victoria transforms and reeks havoc across town.

The directorial debut for director Tim Reis, Bad Blood is a film that takes the typical werewolf premise and gives it an amphibious twist. The film is also a bit of an allegory for drug addiction, since Victoria’s stepfather Wade (Brian Troxell) is convinced that Victoria is a junkie, which is supported by the sociopathic private eye Paul (Troy Halverson), hired by Victoria’s parents after she goes missing, who provides a leaflet linking drug abuse to the lunar cycle.

When it comes down to it, it seems that Bad Blood is a film that is more about creature effects and gore than a well developed story. Indeed, there are some scenes, such as Victoria’s transformation and the various gory kills that are top notch. However, the rest of the film has a very B-movie plot, which is filled with bad acting and characters that are just there to be killed. That’s not necessary a bad thing, however given how good a film such as Ginger Snaps handled similar subject matter, Blood Blood could have benefited from a few more script rewrites, which perhaps focused a bit more on the equation of the transformation with drug addiction. Bad Blood is a campy creature feature that really could have been so much more.