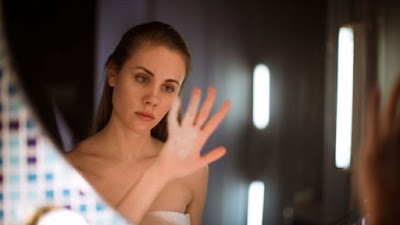 A woman seeks a cure for her rapidly aging skin in Replace. Kira Mabon (Rebecca Forsythe) is a young woman, who is afraid of growing old. Following a date with her boyfriend Jonas (Sean Knopp), Kira finds herself back at his apartment with no memory of recent history. In addition, she has noticed that her skin is starting to dry up and peel away. Kira seeks the help of skincare doctor Rafaela Crober (Barbara Crampton), who wants time to perform tests on Kira’s skin. However, Kira finds that her body is able to absorb foreign skin, which results in her taking extreme measures to maintain her young and beautiful appearance.

From director Norbert Keil and writer Richard Stanley comes a film that comments on the fear of aging expressed by women. On a date with her boyfriend Jonas that opens the film, Kira comments that while men get more interesting as they get older, women just shrivel up and lose their beauty. Immediately after this date, Kira finds herself suffering from amnesia, with her apparently now living in Jonas’ apartment. Kira strikes up a friendship with her neighbour Sophia (Lucie Aron) and tries to figure out what is going on, all while her skin is starting to crumble away.

Replace is a film that combines the fears of aging with some grisly horror, as Kira begins murdering and flaying other women, in order to absorb their skin into her body. There is a very interesting development that comes about later of the film, which results in the story moving into a more science fiction direction. Altogether, Replace is a very interesting commentary on the fear of aging expressed by women and the extreme places one girl goes all in the name of vanity.