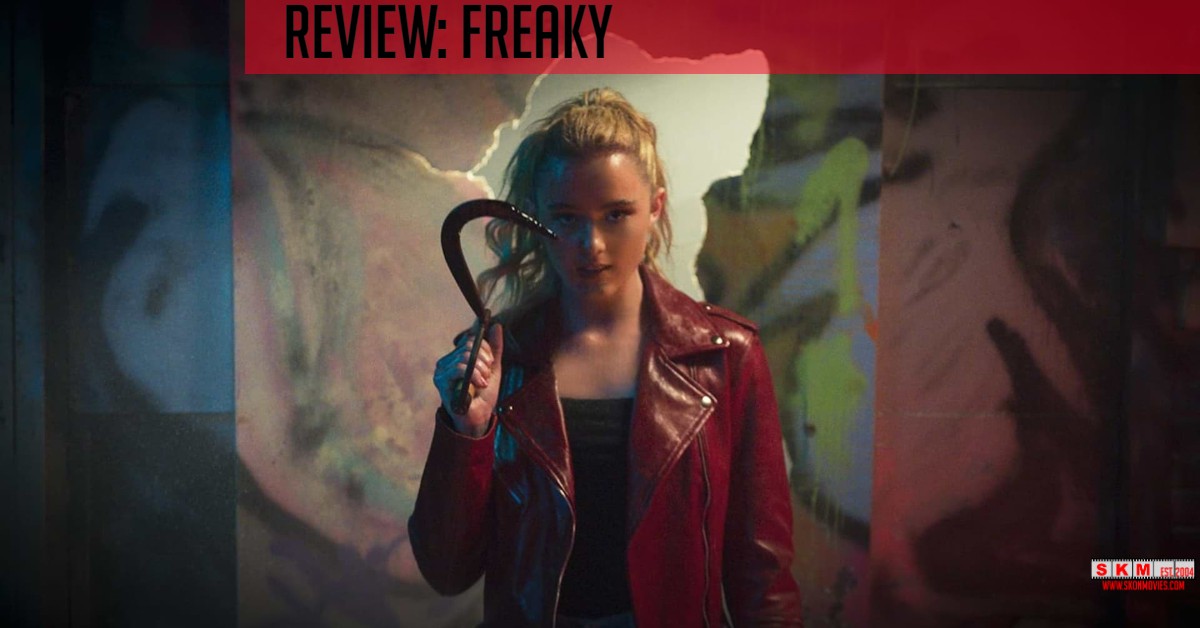 A teenage girl finds herself body-swapped with a serial killer in Freaky. Millie Kessler (Kathryn Newton) is a bullied high school student, whose only true confidants are her friends Nyla (Celeste O’Connor) and Josh (Misha Osherovich). One night while waiting to be picked up after a football game, Millie becomes the next target for the town’s legendary serial killer the Blissfield Butcher (Vince Vaughn). The Butcher stabs Millie in the shoulder with an ancient dagger known as La Dola, which ends up cursing the two, resulting in them swapping bodies. Now stuck in the body of the Butcher, Millie has 24 hours to reverse the curse before the body swap becomes permanent.

Freaky is a new horror-comedy from director and co-writer Christopher Landon (Happy Death Day), who gives a slasher film twist to body-swapping premise of Freaky Friday, with the original title of the film being Freaky Friday the 13th. The film stars Kathryn Newton (Big Little Lies) as Millie Kessler, who is a teenager having problems at home, as her mother Coral (Katie Finneran) has been drinking heavily, while mourning the death of Millie’s father a year earlier. At school, Millie is the victim of bullying from everyone from members of the school football team to her abuse woodshop teacher Mr. Fletcher (Alan Ruck), all while harboring a secret crush for Booker Strode (Uriah Shelton).

Things become worse for Millie when she becomes a target of the Blissfield Butcher, who has been targeting teens in the town for decades. Millie escapes the attack when her police officer sister Charlene (Dana Drori), but not before she is stabbed in the shoulder with a mystical dagger. Millie wakes up the next morning to find herself trapped in the body of the Blissfield Butcher, the latter of whom quickly amasses a body-count while in Millie’s body. With the help of her friends Nyla and Josh, Millie has under midnight to recover the La Dola dagger and reclaim her body or risk the body-swap becoming permanent.

As with most body-swap films, Freaky is a film that is quite dependent on the performances of the leads and indeed both Vince Vaughn and Kathryn Newton do a great job of mimicking each other’s personalities. Indeed, the main appeal of Freaky would probably be seeing the 50-year-old Vaughn act like a teenage girl for the bulk of the film. Vaughn is also able to accomplish this without a change of clothes, while Newton adopts a more sinister leather jacket sporting appearance while portraying the Butcher in Millie’s body.

While Freaky is ultimately a comedy, the film also works as a slasher film with some very creative and gory kills. In addition, since the bulk of the victims are those who previously bullied Millie, there is a sick satisfaction in seeing them get what’s coming to them. That all said, you still end up wanting Millie to return to her own body by the end of it all.

Overall, when it is all said and done, Freaky ends up being a quite entertaining body-swapping horror-comedy.