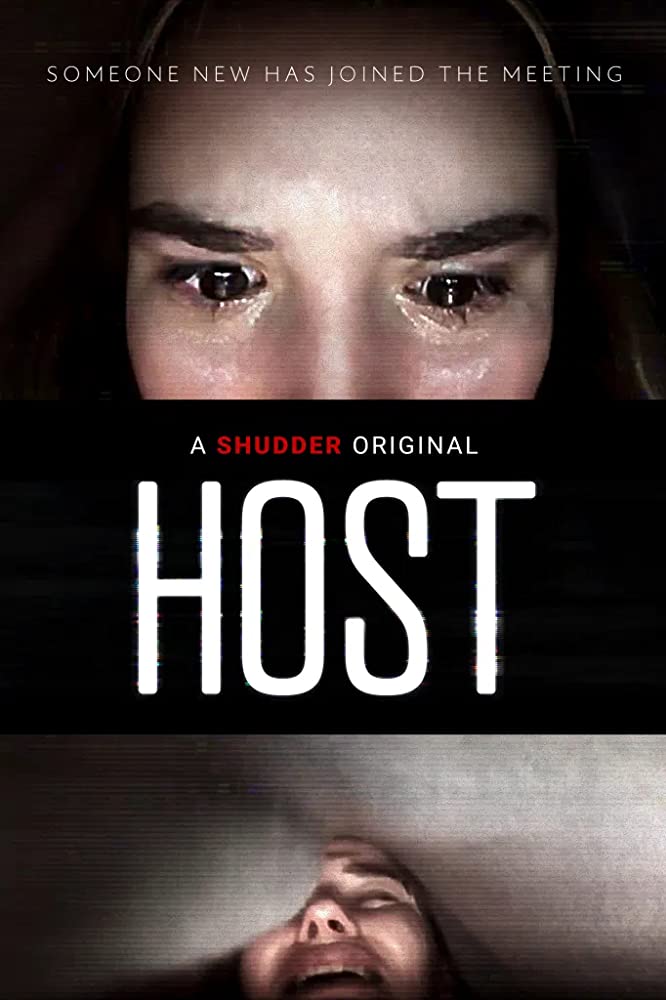 A group of friends Zoom conversation is disrupted by a demonic entity in Host. Haley (Haley), Jemma (Jemma Moore), Emma (Emma Louise Webb), Radina (Radina Drandova), Caroline (Caroline Ward), and Teddy (Edward Linard) are six friends under lockdown, who have gathered for their weekly Zoom conversation. On this particular Zoom meeting, the friends have decided to hold an online seance with the help of the medium Seylan (Seylan Baxter). However, during the seance, a door is unwittingly opened to a demonic presence and the friends begin to fear that they won’t survive the night.

Host is a found-footage horror film done in the burgeoning “Screenlife” style, with the entire plot of the film taking place during a single Zoom conversation. The film, directed and co-written by Rob Savage (Dawn of the Deaf), is also one of the films to be made and set during the 2020 COVID-19 pandemic.

It was back in 2014 when Skype-set horror film Unfriended kicked off a style of filmmaking that Unfriended‘s producer Timur Bekmambetov coined “Screenlife.” Six years laters, we have the release of Host, which is for all intents and purposes, a film with a very similar plot to Unfriended. However, as I was incredibly disappointment with the film that Unfriended turned out to be, I would say that Host ends up being more in like with my expectations for the former.

Host is a film that definitely follows the less-is-more philosophy, complete with the fact that it has a quite brisk 56 minute running time, with the plot taking place over the course of the entirety of a 40-minute Zoom call. While the story follows the typical Paranormal Activity-Esque found footage formula, right down to building up to a final big jump scare, what makes Host remarkable is how the scares are executed. This includes relying almost entirely on in-camera effects, with there being many moments where I would question how exactly a scare was pulled off.

Host is now streaming on Shudder