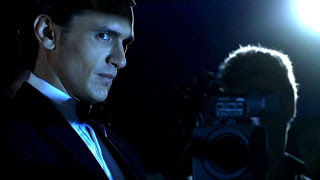 I am not going to waste too much of my energy talking about this “film,” which has ended up being my least favourite of Hot Docs.  So, James Franco was shooting a guest role on General Hospital and there was some behind the scenes footage shot.  According to the introduction by the co-director, there wasn’t really enough footage to create a documentary, so they decided to get experimental.

Oh my God was this film tedious.  What they did was take the behind the scenes footage and have Franco do a whispered voice-over of his thoughts, which comes off like a bad Jean-Luc Godard film.  In addition, there was some footage from General Hospital was was manipulated, so that it was completely white. That’s pretty much what the film was, even though it gets more messed up when the sign on the men’s washroom begins speaking.