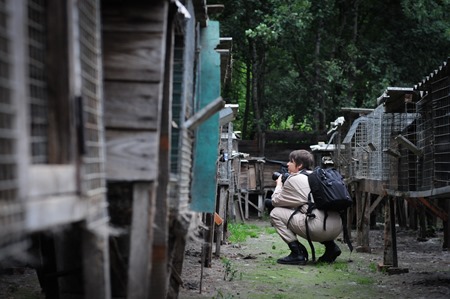 These days it is not too uncommon to go on the subway in Toronto and see a poster about animal rights.  Animal rights has always been touchy subject, since many people have different opinions on it.  Some people are against animal cruelty, but still eat meat, while others heavily endorse a vegan lifestyle.  One of the arguments made in Liz Marshall’s documentary The Ghosts in Our Machine is that, with the exception of pets and certain wild animals, most animals are only seen as food, clothing, animal tested goods, and entertainment.  People often forget that all animals are sentient and have the capacity to feel. The main subject of the film is photographer and activist Jo-Anne McArthur.  Her job involves using her photographs to raise awareness about animal cruelty.  As it is stated at one point, a photograph can do a thousand times more damage to an industry than direct action.  McArthur’s job is only to document the cruelty, not liberate the animals, and she always finds leaving the animals to their fates the hardest part of her job.  To help calm her nerves, she frequently travels to a farm sanctuary in New York, where liberated farm animals are allowed to graze peacefully. If you are an animal lover, The Ghosts in Our Machine can be a very difficult film to watch.  There is a scene in the film where McArthur sneaks into a fur farm to photograph foxes, who are yelping and clawing at their cages.  You are definitely an emotionless person if those scenes don’t affect you in some way.  Even sadder still is that many of these fur farms operate “off the map” in secluded areas, which gives the industry deniability involving their existence. I won’t go as far and call The Ghosts in Our Machine propaganda, though the film does seem to try at times and convince the viewer that a vegan lifestyle is the way to go.  The argument made by Jo-Anne McArthur is that all animals are sentient beings and have feelings and personalities.  In fact, the film goes as far to credit every animal that appears in the film by name, under the heading “Non-Human Animals.”  The film makes the very compelling argument that most animals are now raised on factory farms and that over ten billion are killed each year for food (a number that does not include sea animals). Of course, it is very difficult to endorse a vegan lifestyle when consuming meat and dairy is so ingrained in our culture.  The film features a number of voice clips, in which various individuals give their opinions on animal rights.  The most compelling quote for me came from Temple Grandin, in which she said that we can use animals in ethical manners for food, but must give them a life worth living.  Overall, I have to say that The Ghosts in Our Machine definitely gets you thinking about animal rights.  The whole perception of animal rights is quite vague and there are many in this world, who believe that animals aren’t even deserving of them.  Since it’s a personal choice, I’m not sure how many people would truly go vegan after watching this film.  However, I do have to admit that the film caused me to rethink all the meat I consume. 9 | REALLY LIKED IT