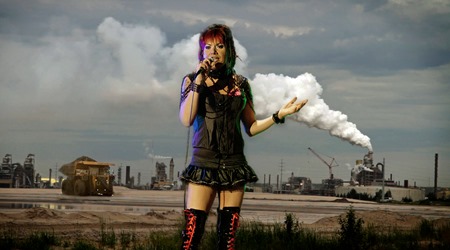 Canada’s Oil Sands is the second largest deposit of petroleum on Earth and has been a constant source of controversy.  The Oil Sands are a regular target of environmentalists, while oil companies praise their product as “responsible terror-free oil”.  However, Oil Sands Karaoke isn’t really about any of that.  Instead, the film is about a group of oil workers, who regularly let themselves loose in a local karaoke bar. Bailey’s Pub is a karaoke bar in Fort McMurray, Alberta, where the folks that work in the Oil Sands can escape from the reality of their lives and sing their hearts out.  Some of the regulars at the bar include Dan –  a haul truck driver with a fondness for country music, Brandy – a first Nations woman who credits her Oil Sands job with saving her life, Jason – a nerdy truck driver first seen humorously singing Britney Spears, Chad – a talented labourer with ambitions of a musical career, and Massey – an openly gay business owner, who performs in drag under the alter ego “Iceis Rain.” The film compares and contrasts each of the singers with their day jobs working in the Oil Sands.  Most of these individuals try to ignore the negative stigma of living in Fort McMurray and just concentrate on their jobs, which is often scheduled with them working for nine days straight, followed by only three days off.  It has been noted that Fort McMurray has developed a lot in the last decade and relies heavily on the profits of the oil industry to thrive.  I have to admit that I was quite interested in the mining process, which involved shovelling the sand into the absolutely giant haul trucks.  Seeing the size of those trucks is definitely an impressive sight. Of course, karaoke is the main highlight of the film and the film climaxes with a karaoke contest in the bar.  While much of the film intersperses the karaoke with the background stories of the singers, the contest puts the songs front and centre.  As a huge fan, and regular participant, of karaoke, this was definitely my favourite section of the film.  Out of all the featured singers, I thought that Massey, aka Iceis Rain, had the most emotional and tragic story of the bunch and Iceis’ rendition of the song “All By Myself” was the true showstopper of the film. Overall, Oil Sands Karaoke just goes to show that the Oil Sands workers are people too and that they know how to let their hair down and have a good time.  While the film doesn’t bother to tackle the more serious issues related to the Oil Sands, it is still one entertaining good time.8 | LIKED IT